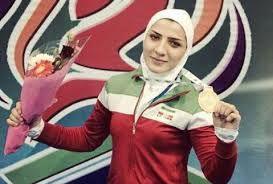 Tasnim – Sedigheh Daryaei from Iran claimed a gold medal in the 8th Sanda World Cup Coming Up underway in China.

The 8th Sanda World Cup represents the “best of the best” in Xian, China from November 4 to 6.

The competition has brought a total of 71 world champion athletes from 19 countries comprised of top placing sanda athletes from the previous World Wushu Championships together.

Iran has participated in the prestigious competition with seven athletes.