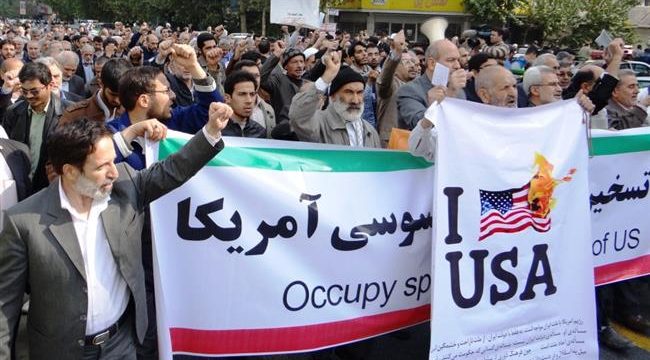 Press TV- Iranians have taken to the streets across the nation to demonstrate their disapproval of US policies on the anniversary of the takeover of the American embassy in Tehran 37 years ago.

November 3 corresponds with the 13th of Aban in the Iranian calendar, which is known as the Student Day to honor those who stormed the “den of spies” and captured its operatives.

Leader of the Islamic Revolution Ayatollah Seyyed Ali Khamenei said on Wednesday that despite decades passing from the incident, and direct talks between authorities of the two countries to resolve issues, Washington still pursues an aggressive policy towards the Islamic Republic.

Washington’s main goal is to hinder the Iranian nation’s progress, warned Ayatollah Khamenei, adding that the US has never stopped its hostilities towards the Islamic Republic.

The Leader said the seizure of the center of espionage, which aimed to overthrow the Islamic Republic, was the “natural response” to Washington’s hostilities.

The late Leader and founder of the Islamic Republic, Imam Khomeini, hailed the takeover as a “second revolution” after the Islamic Revolution in 1979 which toppled the Shah of Iran.