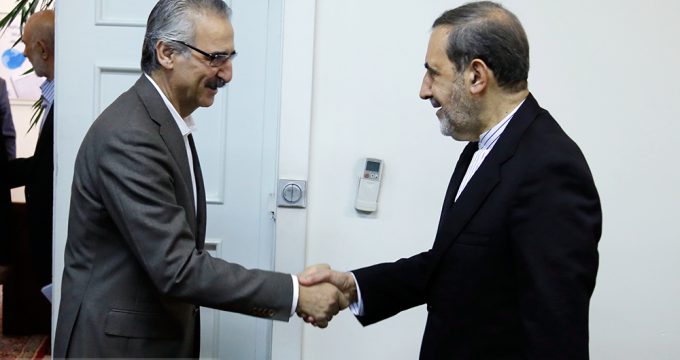 A senior adviser to Leader of the Islamic Revolution Ayatollah Seyyed Ali Khamenei has warned of plots hatched by the US and its regional allies to divide the Middle East countries, saying such a move aims to safeguard the Israeli regime’s security.

“The Americans and some of their regional allies are trying to sow discord and break up the region and want to partition and weaken big, strong and ancient countries in the region in order to [ensure] Israel’s security and meet their own excessive demands,” Ali Akbar Velayati, the Leader’s top adviser on international affairs, said in a meeting with Mala Bakhtiar, chief of Executive Body of the Patriotic Union of Kurdistan (PUK), in Tehran on Tuesday.

The senior Iranian official stressed the importance of resisting such an malicious plot, saying that the enemies of Islam are committing crimes against oppressed nations in the region, including the Iraqis and Syrians, in the name of Islam by waging “proxy wars” and creating extremist and Takfiri terrorist groups.

Velayati added that plotters and reactionary countries in the region seek to sow discord among Muslim nations; however, regional people would certainly be the final victors.

He further pointed to the great cultural and religious commonalities between the Iranian and Iraqi people and said both countries give priority to the development of relations.

Bakhtiar, for his part, said the era of hegemony and arrogance is over and added that plotters would fail to achieve their divisive goals in the region.

The PUK official added that Iran is carrying out effective measures to promote regional peace and stability.