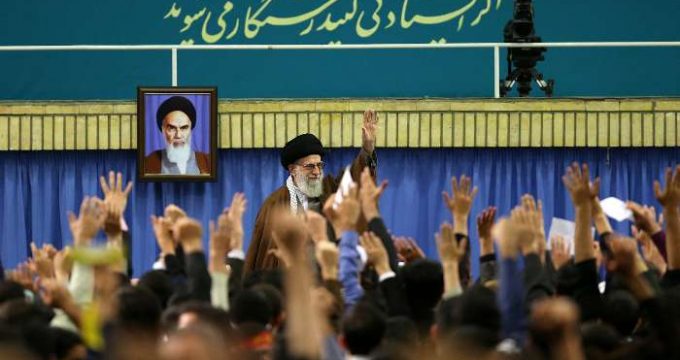 Supreme Leader of the Islamic Revolution Grand Ayatollah Sayyed Ali Khamenei rejected on Wednesday the remarks about negotiations and compromise with Washington, and said the “liar, disloyal and cheater” US is itself a crisis-hit country.

Iran’s Ambassador to UN called for an end to the ‘abhorrent Israeli regime occupation’, which he deemed the most destabilizing threat to international peace and security.

Leader of the Islamic Revolution has received and briefly addressed a meeting of families of martyred Defenders of the Shrine on Tuesday evening.

Compromise with US not to solve Iran issues: Ayatollah Khamenei

Leader of the Islamic Revolution Ayatollah Seyyed Ali Khamenei warns that compromise with the United States will not resolve the country’s problems as Washington has not set aside its hostilities towards the Iranian nation.

Greece has defied its European allies and Washington by blocking European Union sanctions on an Iranian bank the U.S. accuses of financing terrorism, officials familiar with the move say.

Trade is growing between Britain and Iran and the government is working to resolve banking sector concerns which are limiting its further expansion, British trade minister Liam Fox said on Wednesday.

Majlis commission to report on US human rights violation cases

Iranian parliament’s National Security and Foreign Policy Commission will publish a detailed report on the human rights violations committed by the US.

Slovenian President Borut Pahor is due to visit Iran in the near future to inaugurate his country’s embassy in Tehran.