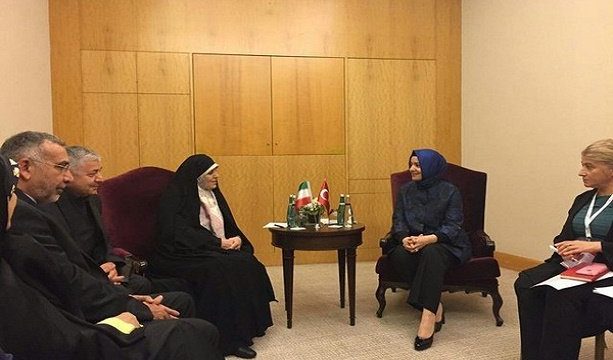 ISTANBUL, Nov. 02 (MNA) – Iran’s VP for Women and Family Affairs and Turkey’s Minister for Family and Social Policies met in Istanbul on Tue. to call for expansion of cooperation on women issues.

Shahindokht Molaverdi, Iran’s Vice-President for Women and Family Affairs, met Turkish Minister for Family and Social Policies, Fatma Betül Sayan Kaya, on Tuesday on the sidelines of the 6th session of the OIC Ministerial Conference on the Role of Women in the Development of Member States that was held in Istanbul on 1-3 November 2016. The theme of the conference was “Status of Women in the OIC Member States in light of Current Challenges”, with ministers of 56 states in attendance.

During the meeting, Molaverdi stressed Iran’s clear and quickly-announced position toward the failed coup d’etat in Turkey, saying “Iran has always been a friend to Turkish people during difficult times and we hope that the current situation will allow us to expand political and economic relations to the level expected by the presidents of both countries.”

The Iranian VP highlighted the significance of bolstering regional and international cooperation between the two neighboring countries, and stressed the status of Iran and Turkey as two important OIC Member States that can cooperate on settling regional issues.

Molaverdi further extended an invitation to Ms. Betül Sayan for visiting Iran, which was welcomed by the Turkish minister.

The Turkish minister, for her part, thanked Iran for its immediate support to the nation and government of Tureky at the night of the coup, and expressed hope that the two countries’ relations would expand in all political, cultural and economic areas.

She also voiced readiness to hold further consultations with her Iranian counterparts on developing cooperation on women and family affairs.