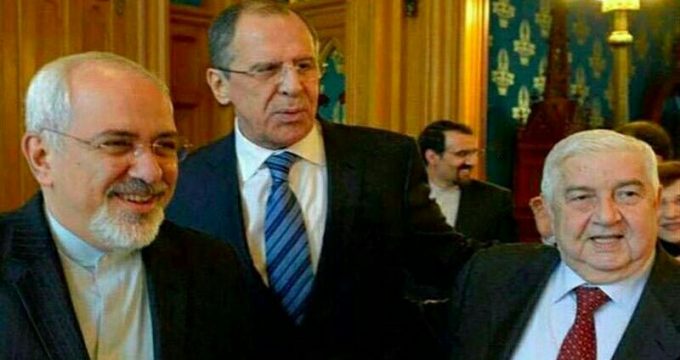 Moscow talks on Syria: US hinders new round of talks

October 29, The Iran Project – Iran, Russia and Syria Foreign Ministers Mohammad Javad Zarif, Sergey Lavrov and Walid Muallem held a trilateral meeting in Moscow on a political solution to the Syria crisis besides a serious fight against the Takfiri terror groups operating in the Arab country, on October 28.

Upon his arrival at Vnukovo International Airport in Moscow on Friday morning, Zarif said:

“We have always stressed the need for comprehensive ceasefire (in Syria), broad humanitarian aid deliveries (to Syrians) and finding a political solution to the Syrian issue.”

Meanwhile, ahead of the meeting, Lavrov said the three nations are acting as a united front against terrorism, saying their talks are mainly focused on ways of seriously tackling terrorism, particularly in Syria.

Prior to the three-way discussions, Zarif held a bilateral meeting with Lavrov to discuss regional issues and the further enhancement of bilateral Tehran-Moscow ties.

The trade turnover between Russia and Iran in the first 8 months of 2016 was 1.5 times higher than during the same period of the last year, Russian Foreign Minister Sergey Lavrov said Friday at the talks with his Iranian counterpart.

“Iran and Russia have reached significant progress in all spheres of bilateral ties as well as in international issues,” he added.

“Russia and Iran welcome the Syrian government’s readiness to enhance cooperation with the UN in solving humanitarian issues, that was confirmed today,” the Russian minister said. “We believe that the UN representatives should act impartially, refrain from responding to provocations, and do everything possible to confront terrorists in Syria.

“We in Syria are ready to work on a political solution to the crisis, and are also ready to immediately resume the intra-Syria dialogue with no involvement of third countries,” Muallem said during the talks with his Russian counterpart. “The United States and its allies are not allowing to hold a new round of talks,” he added.

The Syrian foreign minister also reiterated that the government does not maintain any contacts with the US-led anti-terrorist coalition and questions its effectiveness, adding that the coalition’s operation that has lasted more than two years yielded no results.

Damascus is certain that Washington is not eager to meet its commitments in regard to Syria, he added.

“The U.S. admits the roles of Russia and Iran (in resolution of the Syria crisis) but cannot cooperate with us,” Muallem said. “We have no trust in the United States. We are certain it will not meet its commitments.”

“Iran has pointed out several times on the importance of comprehensive, joint fight against terrorism. It is very critical to maintain neutral posture when it comes to humanitarian aid since all the Syrian regions require it. Unfortunately, several international humanitarian organizations used humanitarian aid as leverage for achieving their immediate political goals,” Zarif told.

During the presser, Muallem slammed the US-led coalition purportedly fighting Daesh, saying the alliance has never been fighting terrorism despite its claims.

He said the Washington-led campaign was in fact encouraging Daesh terrorists to move from Iraq’s Mosul to Syria’s Raqqah.

The Syrian foreign minister further said his country would continue cooperation with Iran and Russia in efforts to eradicate terrorism.

Zarif, in turn, described the talks in Moscow as “very productive.”

Countering terrorism requires international willpower, which is still lacking, the top Iranian diplomat said at a joint press conference after the trilateral meeting. 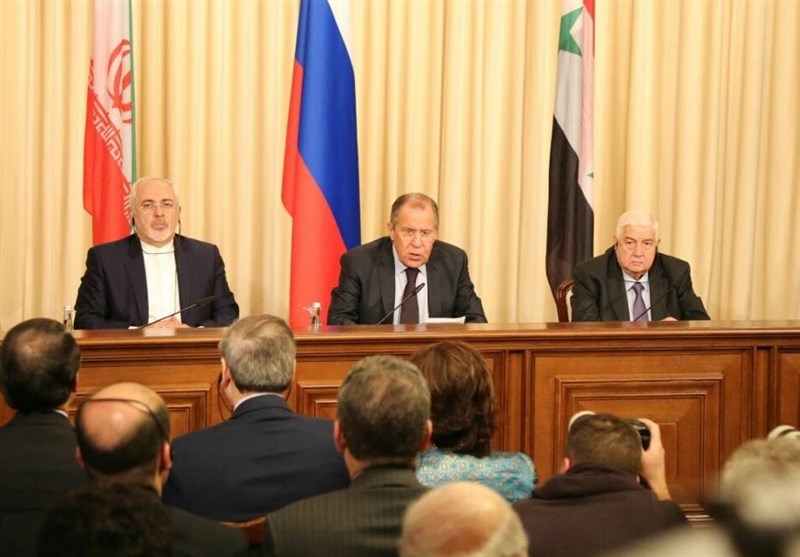 Zarif added that supporting terrorism would serve the interest of no one, warning that the terror groups would eventually “bite the hands that feed them.”

In separate comments, Russian Foreign Minister Lavrov noted that the efforts are focused at cutting financial supports for the terrorist groups in Syria.

He also criticized the US for its failure to delineate terrorist groups and the Syrian opposition.

he Russian minister then highlighted efforts to prevent the militants in Iraq’s northern city of Mosul from fleeting to Syria, adding that the trilateral meeting has defined the joint strategies that will be adopted soon for battling terrorist groups such as Daesh (ISIL) and al-Nusra Front.

Lavrov emphasized that the fight against terrorism in Syria will continue, adding that “future common steps” in this regard during the Moscow talks.

The two officials explored ways to enhance level of cooperation among Tehran, Moscow and Damascus on the campaign against terrroism.

Iranian and Syrian foreign ministers called for boosting mutual ties between the two states in all fields.

The foreign-sponsored conflict in Syria, which started in March 2011, has claimed the lives of more than 400,000 people, injured 1.9 million others, and displaced nearly half of the country’s pre-war population of about 23 million within or beyond its borders, according to a report by the Syrian Center for Policy Research.

While, the US and some other western countries support the policies which favor Takfirists and some countries of the region, and merely chant some pretty slogans in support of human rights; Iran and Russia seek to help Syrians in practice not by empty slogans.