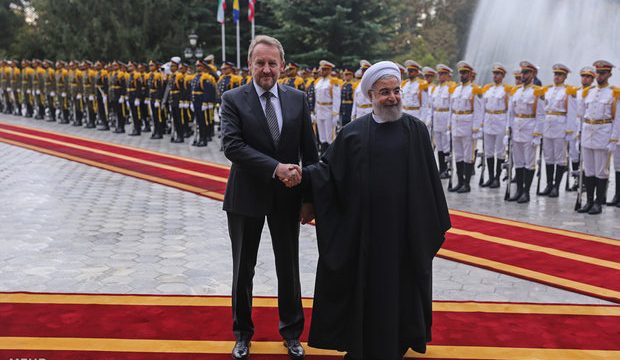 “In the past years due to sanctions, the two countries’ relations were on a downward spiral, but today, after the Joint Comprehensive Plan of Action (JCPOA), conditions are completely ripe for Iran and Bosnia to further develop economic ties,” Iranian President Hassan Rouhani said in the press conference on Tuesday.

“Iran has always had good relations with Bosnia, and this visit will mark the beginning for further cooperation between the two countries,” he added.

President Rouhani noted that their talks focused on economic and trade ties, the private sector, scientific and cultural cooperation, as well as tourism. The two sides also conferred on regional developments, and combating extremism and terrorism.

“A list of areas for cooperation is planned to be reviewed and finalized at a joint commission’s meeting that will be held in Sarajevo in December,” Rouhani said.

The Bosnian senior official, for his part, maintained that the anti-Iranian sanctions had at some point put a dent in the two countries’ relations, adding “we received the news about the final agreement on Iran’s nuclear deal with absolute joy, and I believe that in the wake of that deal, a good opportunity has presented itself for developing relations with Iran.”

He added that Iran could use Bosnia and Herzegovina as a gateway for trade cooperation with the European Union.

Elsewhere, he talked about Islam as the religion of peace, stability and kindness, adding “those who attempt to tarnish the image of Islam have nothing to do with that religion. Iran and Bosnia will join their efforts to display the true face of Islam to the world.”

“Next year, Iranian Foreign Minister will visit Bosnia and I hope the visit of Iranian President will also occur next year,” he said.

The Chairman of Bosnia and Herzegovina Presidential Council Bakir Izetbegovic arrived in Tehran on Monday night at the invitation of his Iranian counterpart to promote mutual ties in political, economic and cultural arenas. Izetbegovic is also scheduled to meet with Iranian Parliament Speaker Ali Larijani and to pay a visit to the historical city of Isfahan during his stay in Iran.