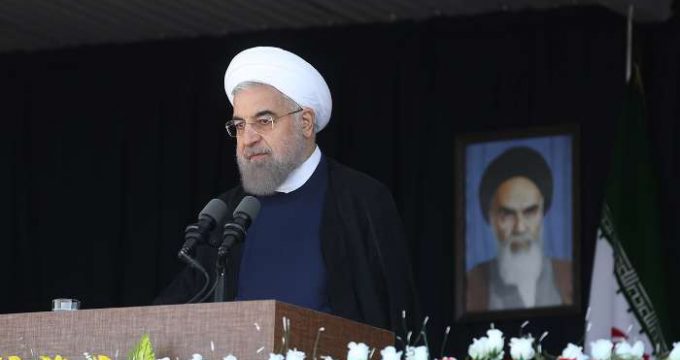 Addressing a gathering in Khomein in this central Iranian province on Monday, Rouhani said the Iranian nation which has tried for centuries to establish the Islamic Republic system in the country will never lose it.

President Rouhani made the remarks after visiting the house of the late Imam Khomeini in Khomein. Khomein is the birthplace of Imam Khomeini, the founder of the Islamic Republic of Iran.

The motto of ‘Neither East, nor West, Islam is the best’ which was echoed by Imam Khomeini taught the nation that it should stand against all powers, Rouhani who is now in Markazi province on his 32nd provincial tour said.

Touching on the country’s problems, Rouhani said from now on, the country will have one million new ready workforce every year.

On the country’s achievements, the president said Iran’s non-oil exports exceeded the country’s imports last year, stressing that it happened for the first time in the past 60 years in the country.

Such a good happening that was also repeated in the first three months of the Iranian calendar year (started on March 20, 2016), is considered as a progressive movement, Rouhani noted.

About the July 2015 nuclear deal, known as the Joint Comprehensive Plan of Action (JCPOA), the president said the Supreme leader of the Islamic Revolution was able to create due conditions under which the skilled Iranian diplomats did hold elaborate talks after which six unjust resolutions against Iran were cancelled in a day.

Rouhani and a number of his cabinet members arrived in Arak on Sunday on a two-day provincial visit.