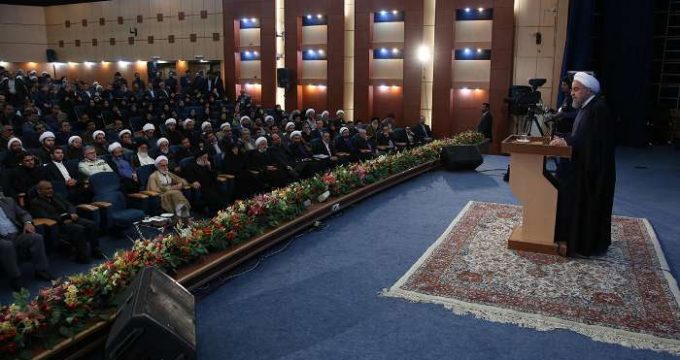 Arak, Markazi prov, Oct 24, IRNA – President Hassan Rouhani has said one of the objectives of July 2015 nuclear deal, known as the Joint Comprehensive Plan of Action (JCPOA), was to gain the world’s new technology.

President Rouhani made the remarks Saturday evening in this central Iranian province while addressing the war veterans, Ulema and elites here.

With the JCPOA, Iran was to get its rights and reach an agreement with the world in order to open the global doors to the country’s economic move, the president said.

Rouhani, who is now in Markazi province on his 32nd provincial tour, added that the Supreme Leader of the Islamic Revolution has also stressed importance of adopting state-of-the-art nuclear technology.

Also, he said, the South Pars gas field in south of the country needs modern technology.

Rouhani further stressed importance of getting familiarized with the new technologies in line with exploiting rich oil resources in the country.

He further said the late Imam Khomeini did give us the lessons of resistance, self-reliance and glory, and brought freedom and independence to the country.