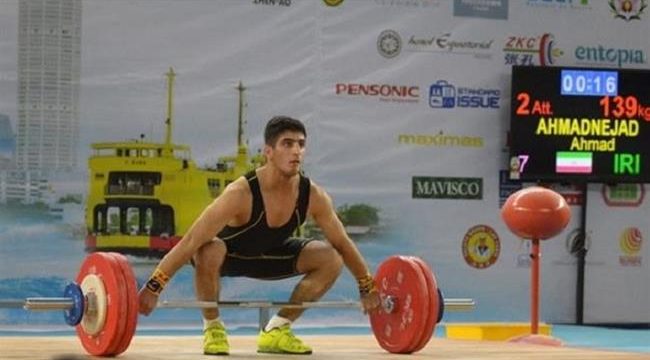 On Sunday, the 17-year-old Iranian athlete lifted 169 kilograms in his clean and jerk attempt of the 77-kilogram weight category of the contests in Penang Island on the northwestern coast of Malaysia.

Colombian athlete Yeison Lopez was awarded the gold with a lift of 191 kilograms. American contender Harrison Maurus lifted 176 kilograms to earn the second spot and receive the silver medal.

Ahmadnejad had initially managed to lift 134 kilograms over his head in his snatch attempt but failed to win a medal in snatch category.

“The IWF Youth World Weightlifting Championships in Malaysia are being contested at a high level since all contenders are producing as good as they can,” Ahmadnejad said after the contest.

He explained, however, that he “had managed to lift up much heavier weights during training sessions, but the course of the events changed here in Malaysia.”

Earlier in the tournament, Hossein Soltani of Iran claimed a silver medal in the men’s 69-kilogram division.

Soltani struck the overall silver with a 295-kilogram finish on Saturday after having lifted 131 kilograms in snatch and 164 kilograms in clean and jerk.

The 2016 IWF Youth World Weightlifting Championships started in Penang Island, Malaysia, on October 19 and will finish on October 25.

The Islamic Republic of Iran Weightlifting Federation has dispatched a team of eight weightlifters to the event.

October 24, 2016
John Kerry and Mohammad Javad Zarif named winners of the Chatham House Prize 2016
Bios of Clinton and Trump, if they were running for office in Cuba – An alternate narrative