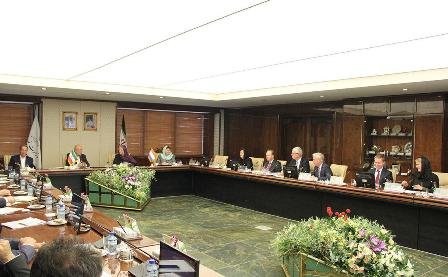 Environmental issues, water management and energy in industrial and agricultural fields can be an important incentive to improve relations between the two countries, he noted.

“Both countries have held numerous talks aimed at boosting mutual ties and cooperation in different areas and in this regard, Iran-Netherlands Trade and Culture Center was officially inaugurated in Hague recently.”

Chitchian underlined that the Netherlands possesses high-tech machines dealing with water as it is a country with many water resources.

Melanie Schultz van Haegen, for her part, reiterated that the signing of the memorandum of understanding would strengthen cooperation between Iran and the Netherlands in the areas of water technology.

“Netherlands can hold good cooperation with Iran in the field of desalination and the use of wastewater in agriculture,” she added.

She also referred to the issues including river, flood and water shortages management, knowledge-based cooperation and training managers in Dutch scientific and educational institutions as incentives to provide the grounds for enhanced cooperation between the two countries.