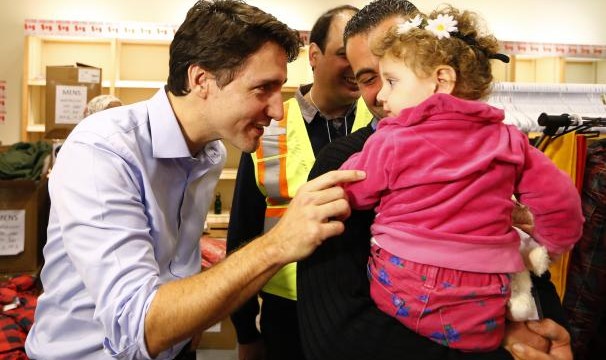 Justin Trudeau doesn’t tell the truth to Canadians about Syria

“Canada is taking a stand at the United Nations General Assembly today to protect vulnerable Syrians and help find a solution to the conflict engulfing that country.

With the support of 70 other UN countries, Canada is applying as much diplomatic pressure as possible on the UN Security Council to break their impasse on Syria.

On behalf of the government, Minister Dion called today for an immediate cessation of hostilities, the provision of unhindered humanitarian access to the victims of the conflict – including children and women – and the resumption of political talks.

I am very proud that our mission at the United Nations, spearheaded by Ambassador Marc-André Blanchard, is leading the charge to protect the many victims of this tragic conflict.

I encourage other countries to help generate forward momentum on Syria, given UN members have a collective responsibility to protect the world’s vulnerable and weak when others cannot or will not.”

What Trudeau did not say is more important.

He did not say that the illegal regime change operation, sold under the guise of the “Responsibility to Protect’ (R2P) doctrine, completely destroyed Libya and made it into a hotbed for terrorists, including ISIS.

The list of omissions demonstrates the lie of Trudeau’s statement.

Trudeau ignored the reality that “cessations of hostilities” provide the terrorists with opportunities to regroup and rearm, and he ignored the fact that his words offer support to Canada’s terrorist proxies, and that they strengthen the West’s propaganda apparatus which presents the terrorists as the “good guys”, as amply documented by the West’s support and adoration of the terrorist-embedded White Helmets.

His words also ignore the fact that the terrorists use captive citizens as human shields.  Syrian Lilly Martin Sahounie reports the following, from Syria:

“Breaking news from East Aleppo: Oct 21, 2016: a family were able to get out to safety! Yes, I watched the interview with them on local TV. The wife said they got tired of waiting so many days to evacuate to safety. They knew that snipers were shooting at people trying to leave, but decided they would take their chances, because he husband was ill and needed medicine and food. They noticed a group of likewise civilians waiting to make a dash for it. They all started running. During their sprint out, 10 civilians with her were shot dead, including a pregnant woman! Her husband said he had been 85 kilos weight, but was now 65 kilos. He was haggard and ill looking, and using one walking cane. The children also stated that they lived in fear of the terrorists. They would not allow children to attend school, they would shoot kids if they stood in the streets and stared at them. Bread had been 25 lira a packet, and was now 1,000 lira. Unbelievable hardships and suffering. I believe these stories because they were coming right out of the mouths of the people, just minutes after running to safety. If it was a reporter recounting stories, I could doubt it, but you can’t doubt their stories. I always said to myself, that once the people get out of East Aleppo, you will hear horror stories, and these stories will directly reflect on these American backed and supported terrorists. You will also hear the TRUE story later of the White Helmets, it will all be revealed.”

To be blunt, the script that the Prime Minister read advances the cancer of terrorism in the Middle East, and sets the stage for more war crimes, beneath the lie of “collective responsibility”.

Canadian citizens have the “collective responsibility” to learn the truth, and to hold our apparently propagandized politicians to account.

Canada should send a non-partisan fact-finding delegation to Syria; we should make amends for our government’s criminality; we should cease our alliance, and arms trade, with Wahhabi Saudi Arabia; we should end our illegal sanctions against Syria; we should leave NATO; and we should denounce all countries that willfully support terrorism.

This article was written by Mark Taliano for American Herald Tribune on Oct 21, 2016. Mark is a retired high school teacher.