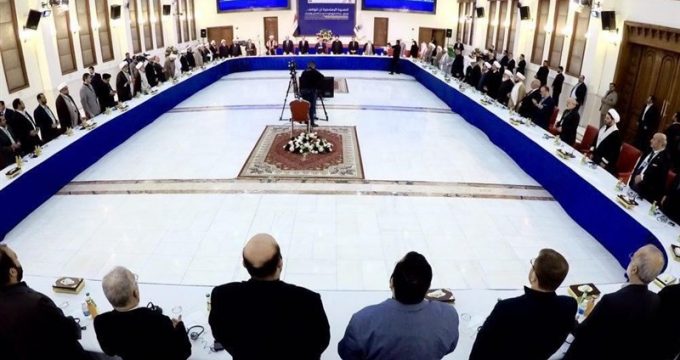 BAGHDAD (Tasnim) – The 9th Session of the Islamic Awakening Supreme Council kicked off in the Iraqi capital of Baghdad on Saturday morning, bringing together representatives from 22 Muslim nations.

The two-day conference commenced with a speech by Secretary-General of the World Assembly of Islamic Awakening Ali Akbar Velayati.

Muslim clerics, scholars and intellectuals from 22 countries have taken part in the gathering, the majority of whom are Sunni Muslims.

The conference is held against a backdrop of a large-scale operation by the Iraqi Army to liberate the city of Mosul from the Daesh (ISIL) terrorist group.

Velayati had announced earlier that the developments in Iraq and the fact that the Arab country has rid itself of US occupation, enjoys a “real, total and unique democracy in the Arab world” and has managed to overcome problems by relying on democracy is a “bright and glorious” manifestation of Islamic Awakening.

9th meeting of the Islamic Awakening Supreme Council, Baghdad, Iraq, Islamic awakening October 22, 2016
15 Iraqi women slain in US-led airstrike in Kirkuk province
The 16 companies that are the first to benefit from an Iran oil payday