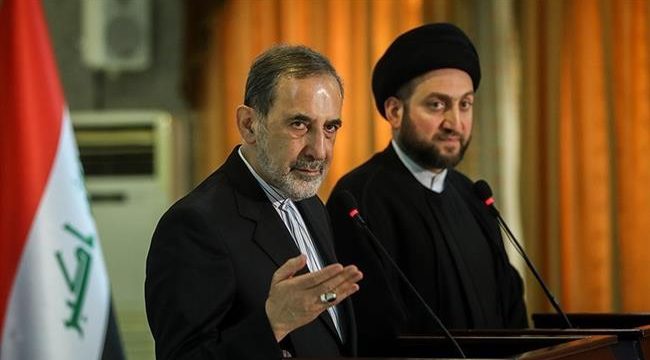 Iran to stand by Iraqi nation in anti-terror battle: Velayati

A senior Iranian official has reiterated the Islamic Republic’s support for neighboring Iraq in its anti-terror battle as the Arab country starts a large-scale operation to drive Daesh terrorists out of the northern city of Mosul.

Ali Akbar Velayati, a senior advisor to Leader of the Islamic Revolution Ayatollah Seyyed Ali Khamenei, made the comments in a Thursday joint presser with Chairman of the Islamic Supreme Council of Iraq Ammar Hakim in Baghdad.

Velayati is in Iraq to attend the 9th session of the Supreme Council of the World Assembly of Islamic Awakening, which is slated to be held in Baghdad on Saturday and Sunday.

The Iranian official, who is also the secretary general of the World Assembly of Islamic Awakening, further hailed the establishment of full democracy in Iraq following its liberation from the US occupation, referring to the 2003 US-led invasion of the Arab country.

Iraq has managed to deal with its domestic problems on its own, said Velayati, adding that Iran stands by the violence-stricken nation in its counterterrorism efforts.

Touching on the upcoming forum in Baghdad, Velayati said the event, which focuses on efforts to uproot the Takfiri ideology, is a show of unity between Shia and Sunni Muslims.

Hakim, for his part, described Daesh as a threat not only to Iraq, but to the entire world.

The Iraqi official said the Baghdad gathering comes at a critical juncture when Iraq is seeking to cleanse Mosul of Daesh terrorists.

Prior to the press conference, the two sides held a meeting in which they exchanged views on the latest developments regarding the Mosul battle, which got underway four days ago.

Earlier in the day, Velayati sat down for talks with Iraqi President Fuad Masum on ways to further bolster bilateral Tehran-Baghdad relations in various fields.

During the meeting, Masum praised Iran for giving his country a helping hand in its decisive battle against Daesh.

The Islamic Republic, he added, was among the first countries that rushed to Iraq’s help when Daesh unleashed its campaign of death and destruction in the Arab state’s northern and western parts in 2014.

For his part, Velayati vowed Iran’s full support for Iraq, saying Tehran is making serious efforts to forge closer ties with Baghdad in all areas.