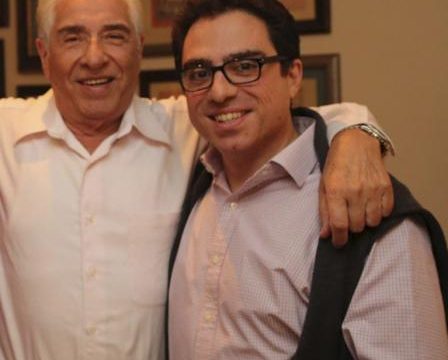 An Iranian court has sentenced an Iranian-American businessman and his elderly father to 10 years in prison on charges of cooperating with the United States, the Iranian judiciary’s official news website reported on Tuesday.

Iran’s Islamic Revolutionary Guard Corps detained Siamak Namazi, a businessman with dual U.S.-Iranian citizenship in his mid-40s, in October 2015, while he was visiting family in Tehran. The IRGC arrested his father, Baquer Namazi, 80, a former UNICEF official and also a dual citizen, in February.

Both men have been sentenced to 10 years in prison “for cooperating with the hostile government of America,” the Mizan website said, citing “an informed source.” It did not specify when exactly the sentences had been handed down.

The sentences are the latest sign of an intensifying crackdown against Iranians with ties to the West directed by hardliners who are powerful in Iran’s judiciary and security forces, in the aftermath of Iran’s historic nuclear deal with the United States and other world powers last year.

Siamak Namazi, who was born in Iran and educated in the United States, worked as a business consultant in Iran for several years, and was well-known in Washington circles.

The U.S. State Department did not immediately respond to a request for comment on the sentences.

“In the case of my father this is tantamount to a life sentence,” Babak Namazi said in a statement. It said each man received a single court session lasting a few hours before the sentences were handed down.

“The details of the charges are unknown to us as of yet.”

Washington and Tehran have not had formal diplomatic relations since the 1979 Islamic revolution that toppled the U.S.-backed shah.

On Sunday, the Mizan news site published video images of Siamak Namazi, set to dramatic music and spliced together with images of U.S. President Barack Obama and Washington Post reporter Jason Rezaian, who was himself released from Iranian jail in January after more than 18 months in detention.

The video shows Namazi’s U.S. passport and identification card from the United Arab Emirates, where he previously lived. It then shows Namazi standing and holding his arms outstretched, as if being searched, while being filmed by at least one other cameraman. The web site said the video depicted “the first images of the moment of Siamak Namazi’s arrest.”

Iran’s deal with world powers lifted most international sanctions and promised Iran’s reintegration into the global community in exchange for curbs on its nuclear program.

The potential detente with the West has alarmed hardliners, who have seen a flood of European trade and investment delegations arrive in Tehran to discuss possible deals, according to Iran experts.

Those hardliners have gained authority since the nuclear deal was signed, at the expense of President Hassan Rouhani, who campaigned on promises of ending Iran’s diplomatic isolation.

Security officials have arrested dozens of artists, journalists and businessmen, including Iranians holding joint U.S., European, or Canadian citizenship, as part of a crackdown on “Western infiltration.”

Four other Iranian-Americans, including Rezaian, were released from Iranian prisons in January as part of a prisoner swap with the United States.

The arrests have undermined Rouhani’s goals of reviving Iran’s business and political ties with the West, as well as pushing for more political and social reforms at home, Iran experts and observers said.

In a 2013 visit to New York to the United Nations General Assembly, his first as president, Rouhani told an enthusiastic crowd of Iranian-Americans that his government would make it easier for them to visit Iran. He has criticized his hardline opponents, saying they sought their own interests, not those of the Iranian people.

Siamak Namazi was most recently working for Crescent Petroleum, an oil and gas company in the United Arab Emirates. He was chosen as a “Young Global Leader” by the World Economic Forum in 2007.

Baquer Namazi, a former Iranian provincial governor, served as UNICEF representative in Somalia, Kenya, Egypt and elsewhere, and for a time ran Hamyaran, an umbrella agency for Iranian non-governmental organizations.

He has a serious heart and other medical conditions requiring special medication, his wife wrote on Facebook in February.

The United Nations human rights investigator for Iran called earlier this month for the immediate release of three Iranians with dual nationality whose health is a matter of concern, including Baquer Namazi.