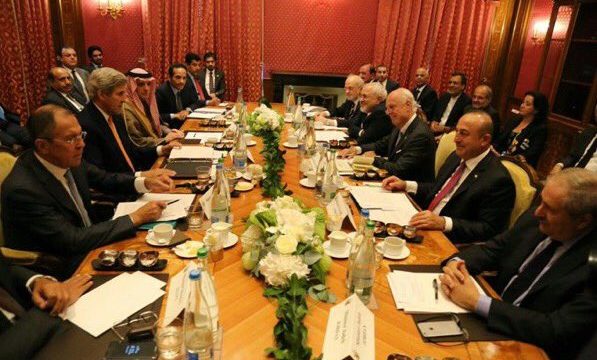 Alwaght- The foreign ministers of Russia, US, Iran, Saudi Arabia, Iraq, and Egypt met in Lausanne, Switzerland and discussed ways to politically put an end to the Syrian crisis.

The meeting came after a US and Russia-brokered ceasefire deal collapsed in Syria, tensions escalated between Washington and Moscow over Syria, and  some regional sides, including the (Persian) Gulf Cooperation Council, threatened to launch attacks on the positions of the Syrian forces fighting an array of the terrorist groups at home.

The US and Russia have entered a stage of post-Soviet Union cold war because of Syria conflict, and are accusing each other of breaching the commitments they make in agreements.

In the shadow of the existing spats the underway peace conference in Switzerland can, to some degree, eliminate the two sides’ disputes. But there are a couple of points behind this Syria-related meeting:

1. The meeting was held without preconditions. In past conferences the argument was persistently on the Syrian President Bashar al-Assad and the insistence by his opponents on his stepping down from power. But Lausanne meeting was held under no conditions. The countries have taken part in the meeting in pursuit of their interests and goals.

Recently, a report by the US Defense Information Systems Agency, part of the US Department of Defense, titled Assessment of Global Threats was delivered to the Senate Armed Services Committee. The report suggests that it is unlikely that Bashar al-Assad falls soon. It recommends that the US cannot go ahead with decision making on Syria based on the regime change policy with a focus on use of force. The report also cautions against the US “ground adventures” in Syria and their consequences. It recommends that even if the US leaders seek militarization of the Syrian developments, they should commission their hasty allies to shoulder the responsibility.

The report also touches upon recent gains made by the Syrian army and allies from the Axis of Resistance on the ground against the armed groups. The report says that Moscow’s support for Damascus is a message sent to Washington to warn the latter not to look down on Russia in terms of battlefield powers. The report adds that if the US moves across the accepted lines, a highly costly war will break out between Washington and Moscow, and on the other hand Iran’s nuclear deal with P5+1will be blown up.

2. The most important item that the participants of Lausanne meeting must have discussed was the blind supports to terrorism in Syria and an international failure to back Damascus in the face of the terrorist groups in Syria. Unfortunately, the key discussion topic set by the US and its allies for the meeting was negotiation of a truce deal. This effort meant moving back as earlier ceasefires failed to hold.

Russia and Iran as the main backers of the Syrian government and people have reportedly focused on demanding the US and the Arab regimes to halt supports for the terrorists battling the Syrian forces, a demand once heard and addressed, could lead to liberation of different terrorist-held Syrian regions and so paving the way for quicker achievement of a political settlement for the conflict.

3. The meeting ended without breakthrough. There are two reasons for that: first, the key topic was discussion of ceasefire while the experiences of past times show clearly that neither the US nor the terrorist groups observe any truce. Two sides have different stances towards Syria crisis, particularly the US and Russia. Before the meeting, the US Department of State and the Russian Foreign Minister Sergei Lavrov took clear stances about the conference. Mark Toner, the spokesman for the US State Department, maintained that it was unlikely that Lausanne meeting results in a significant scheme to the Syrian crisis. Talking to the journalists in a daily briefing, Toner said that they expected no results from Lausanne meeting. Sergei Lavrov also noted that Moscow did not aim to give out a new proposal in Syria meeting. The Russian foreign minister said that Russia expected no specific outcomes from the talks.

4- If the meeting was successful to agree on a solution to end Syrian crisis there would have been no guarantee of enforcement. The parties involved in the Syrian conflict have repeatedly used such meetings to deceive the public and display a phony will and resolution to end crisis in Syria using political ways. For example, Munich meeting on Syria led to agreements never achieved earlier in Geneva III Syria peace conference. Sending humanitarian aids to the civilians caught in crossfire was the first item of the deal. The accord also included terms for cessation of hostilities by two sides and returning to the negotiating table. But as it appeared later, the provisions of the deal remained simply words on paper with no enforcement. At best, the terms were implemented partially.

In general, it must be said that the pro-Syria powers like Russia and Iran press for topics other than ceasefire and direct their major focus on fighting the terrorists and cutting off supply lines to them. Several conferences and meetings so far held on Syria have proven yielding no obvious results. The only exit from the crisis remains holding free elections based on the Syrian people’s will with participation of all political groups and no foreign intervention.