A Look at Iranian Newspaper Front Pages on October 16

The majority of newspapers on Sunday covered the general policies of elections outlined by the Leader of the Islamic Revolution Ayatollah Seyyed Ali Khamenei.

Another top story was the recent talks in the Swiss city of Lausanne on the ongoing crisis in Syria, which were attended by foreign ministers of Iran, Russia, the US, Saudi Arabia, Turkey, and other key players. Only one newspaper, Etemad, reported the fruitless end of the negotiations; all other papers were printed before the end of the talks.

1- JCPOA Challenges Are Because of the Other Side’s Procrastination: Deputy FM

2- Iranian Students May Be Expelled from Indian Universities

4- El Salvador, the Most Dangerous Country in the World 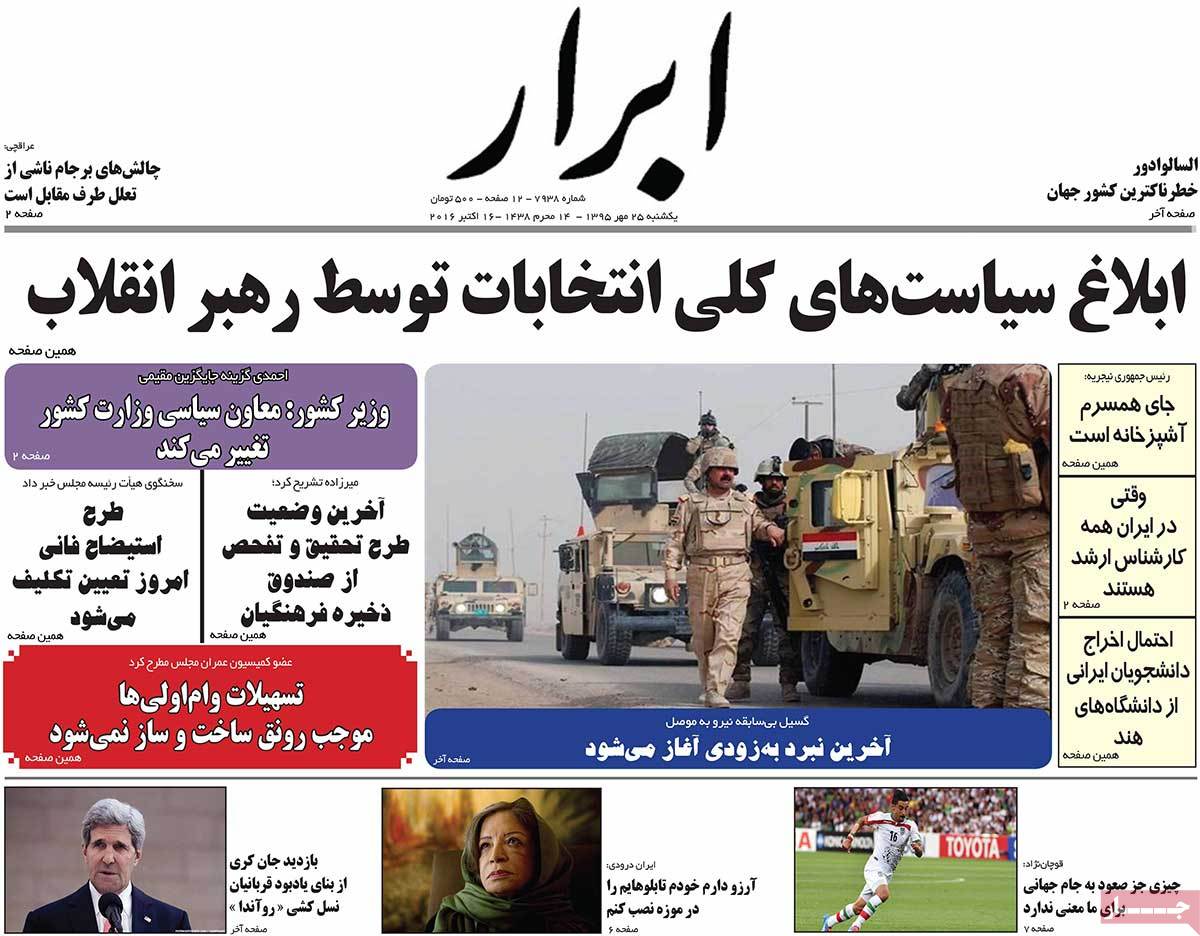 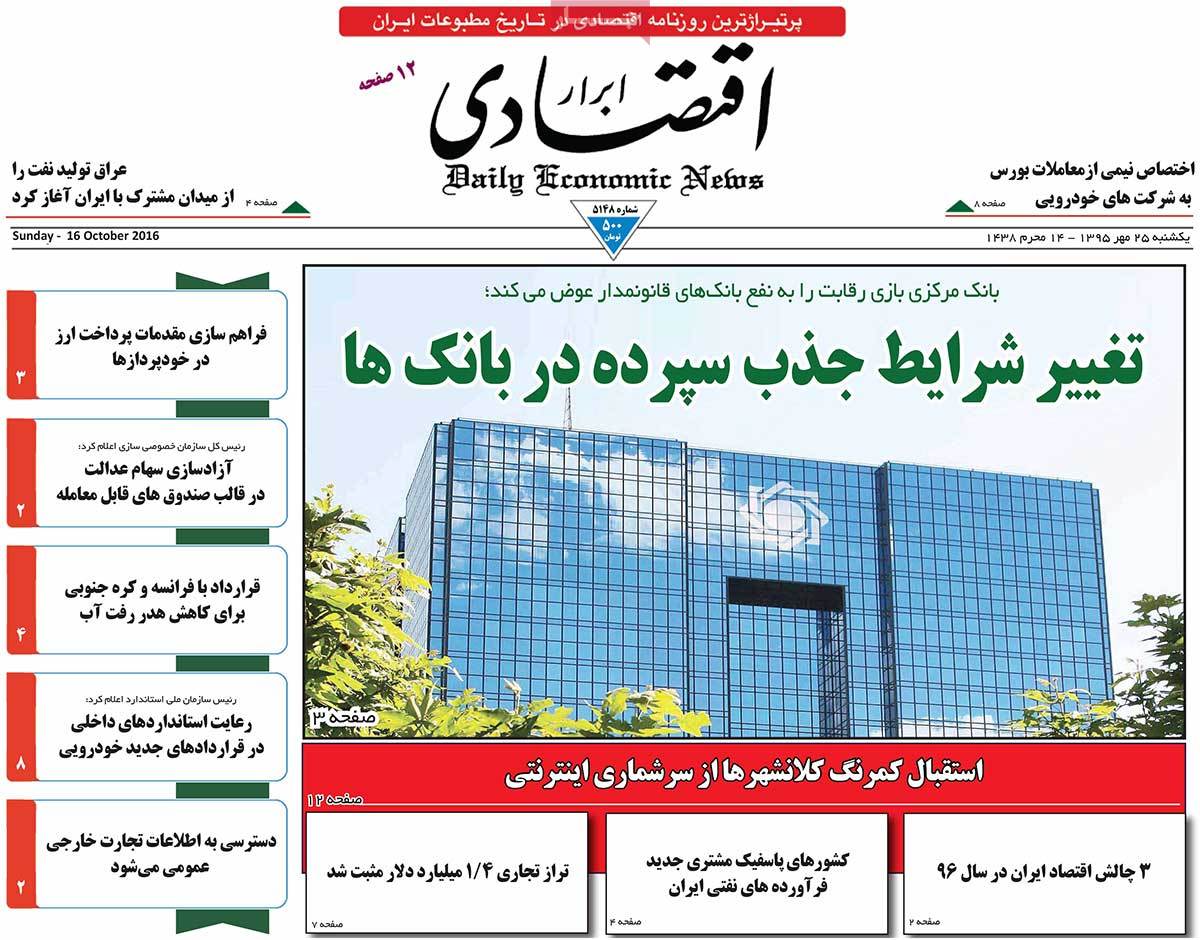 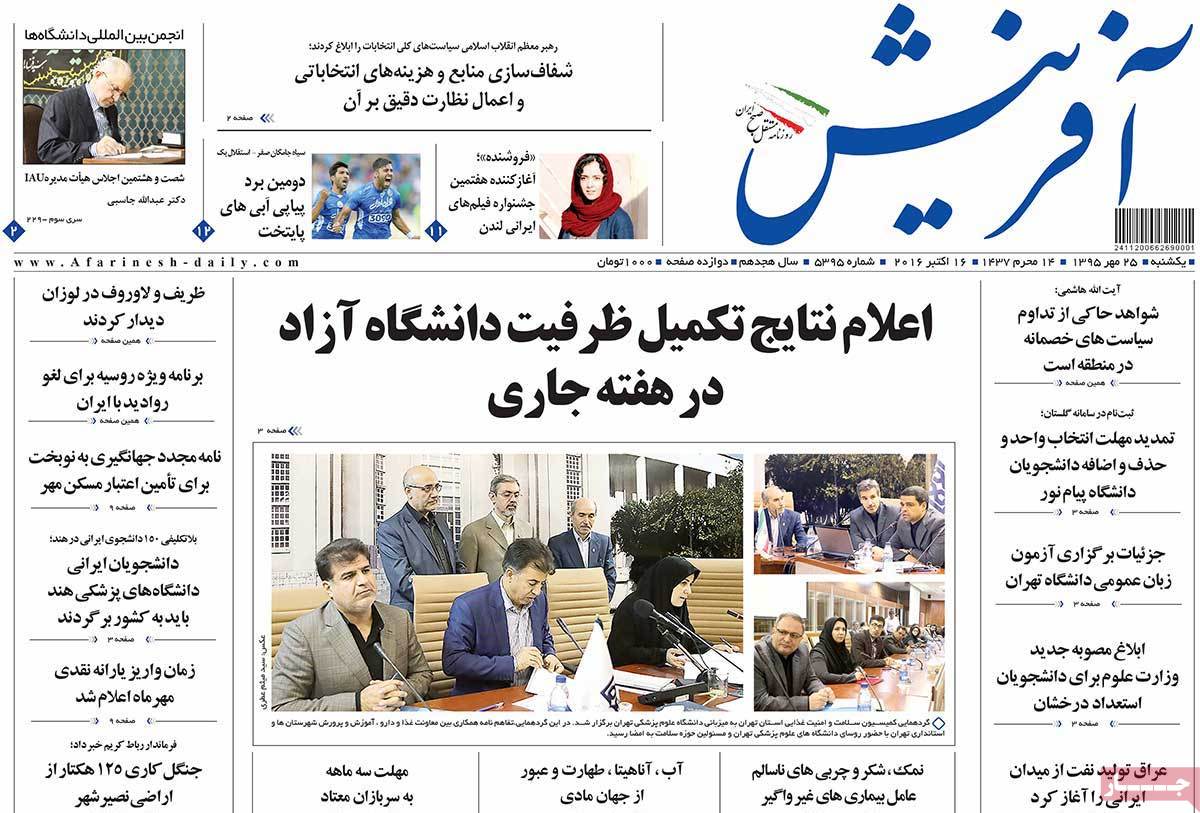 1- Iran’s Envoy to the UN: We’re Worried about the Consequences of Entry and Export of Aggressive Weapons to Saudi Arabia and Israel

2- US Issues Order for Beginning of Cyber-War against Russia 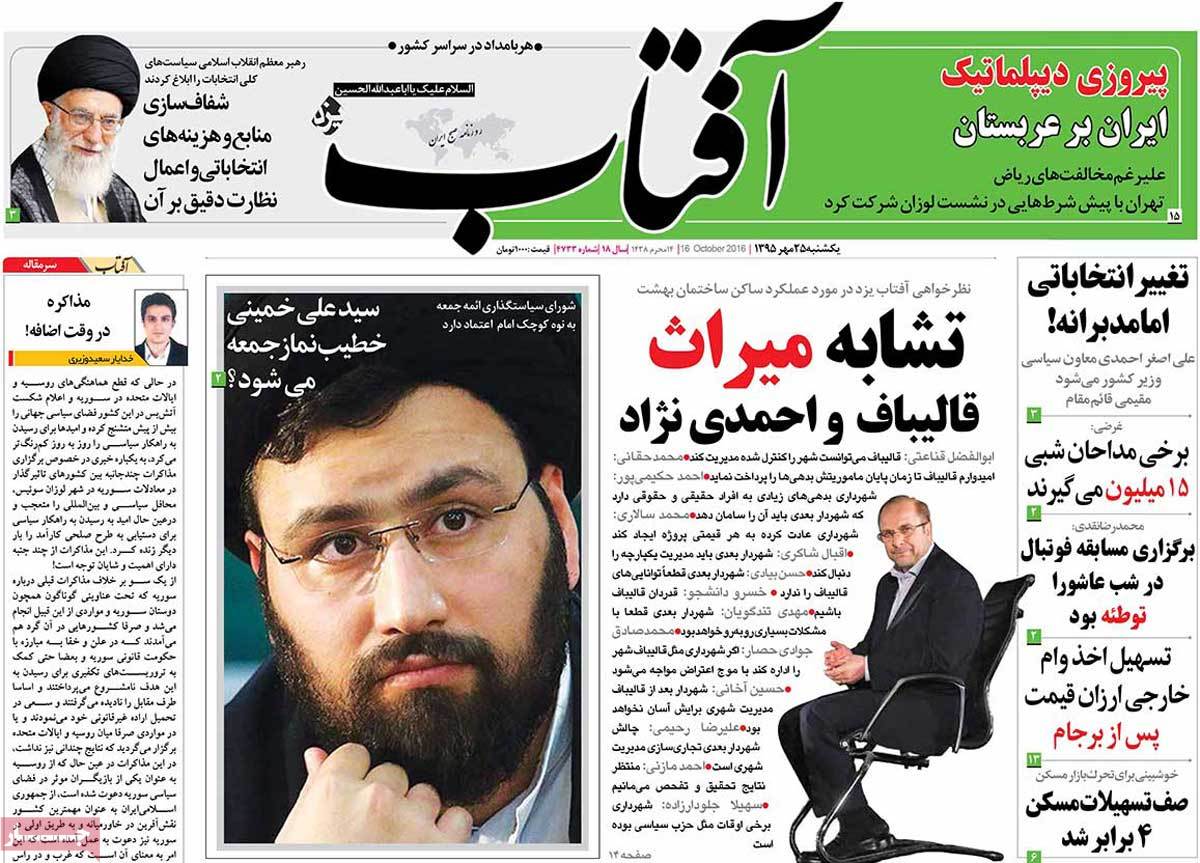 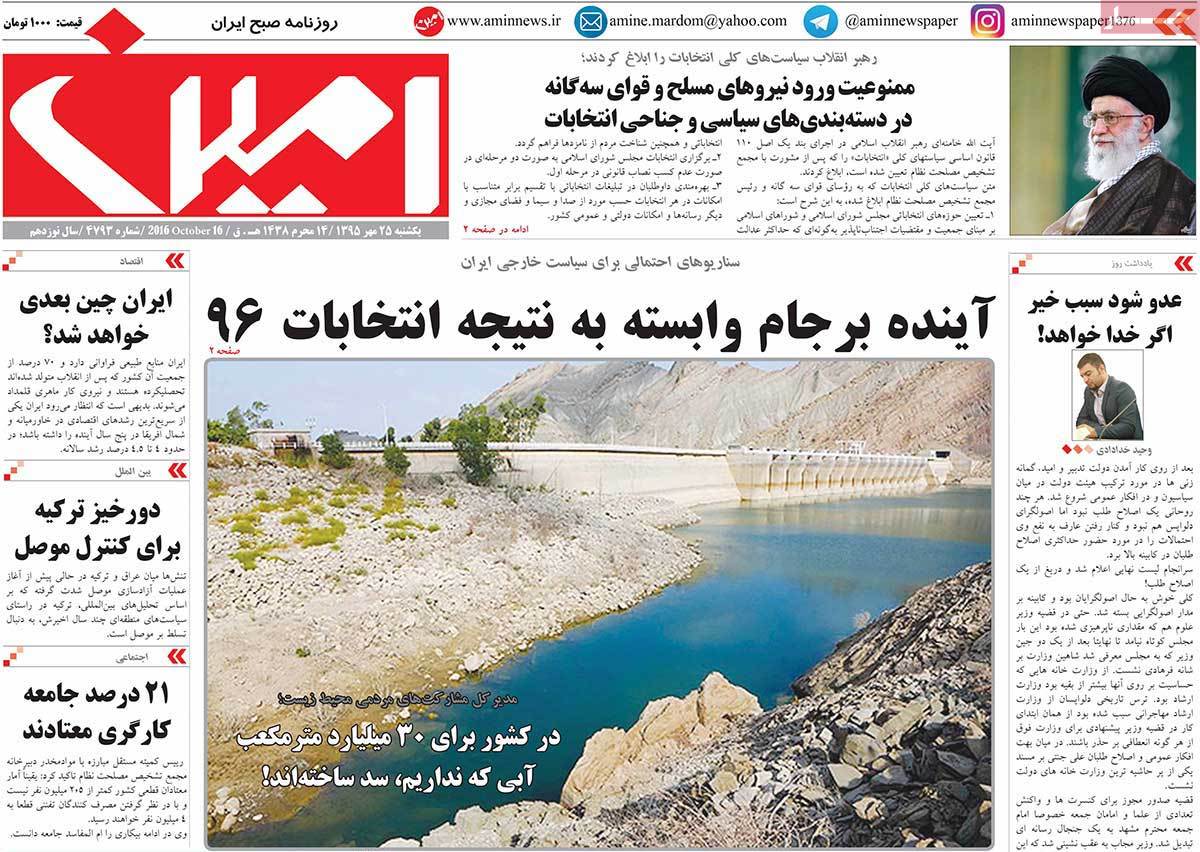 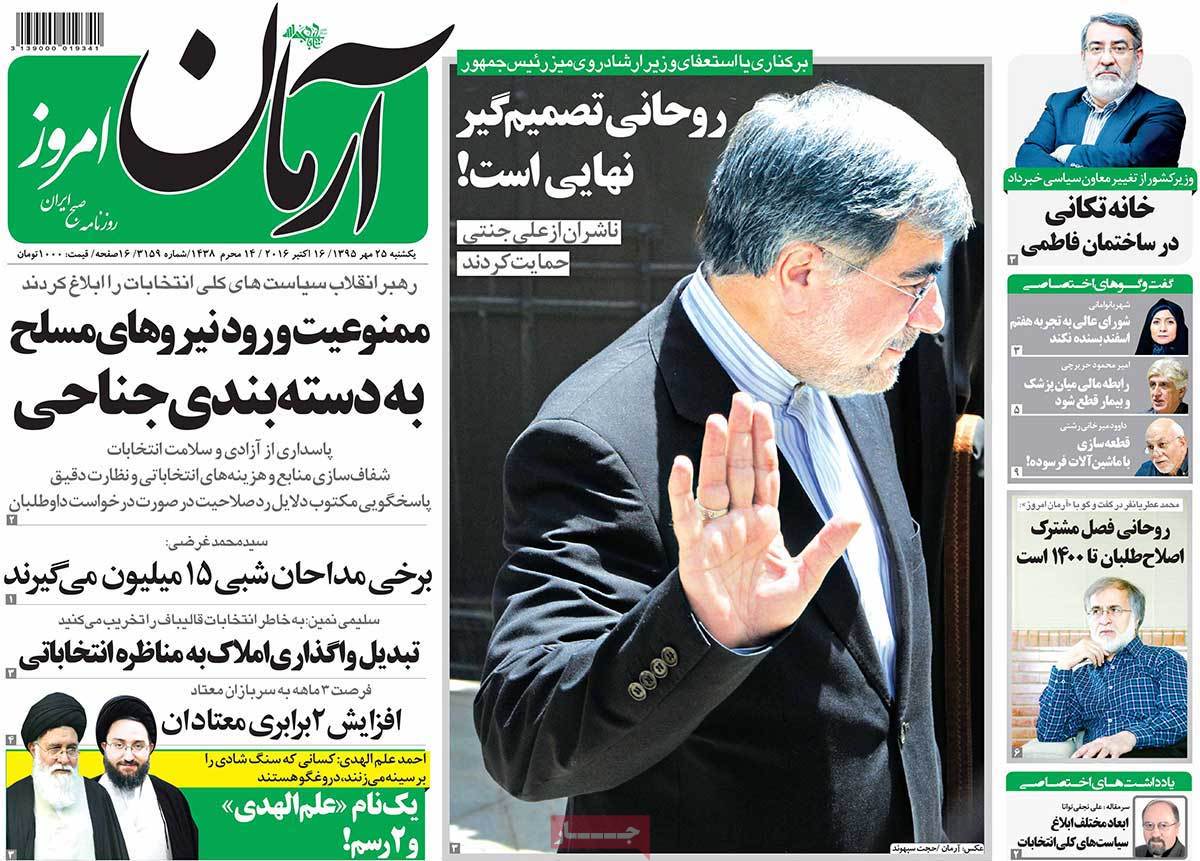 1- Mousavian: Obama Is Looking for Removal of JCPOA Barriers before Leaving the White House

3- Death of Hoor al-Azim: Aquatic Species Dying in a Wetland that Is Turning into a Desert 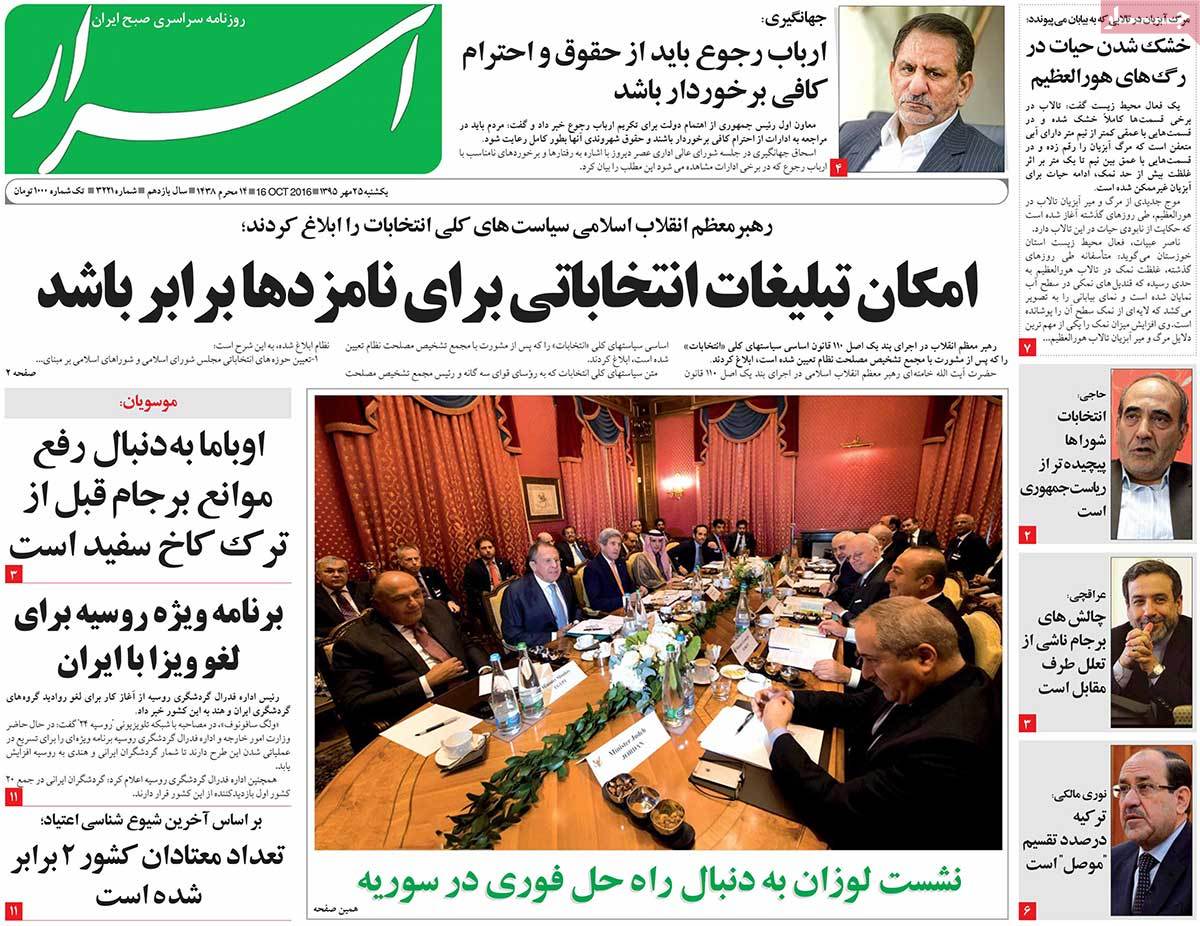 1- Iran Attends a Meeting to Resolve Syrian Crisis: Fate of Aleppo in Lausanne 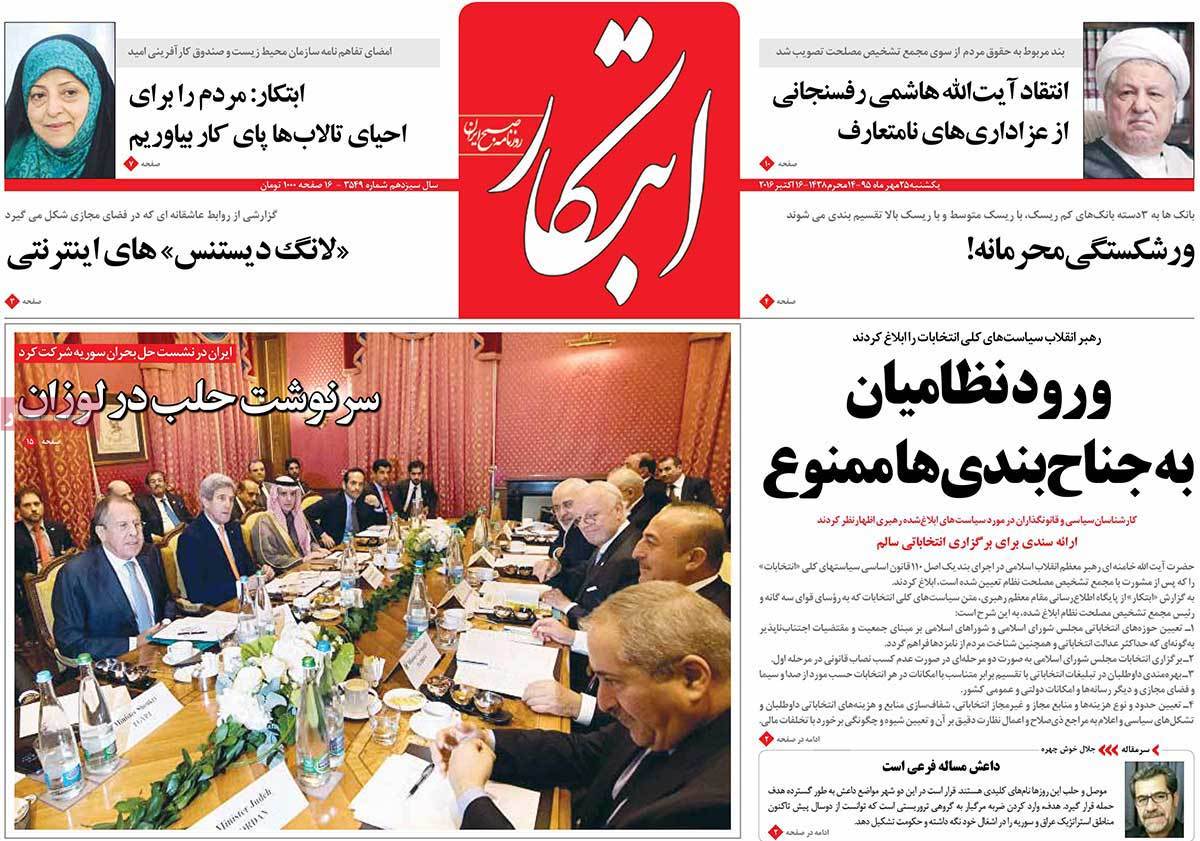 2- Women’s Votes, a Nightmare for Trump: Increase in Number of Women Who Claim Trump Has Sexually Assaulted Them 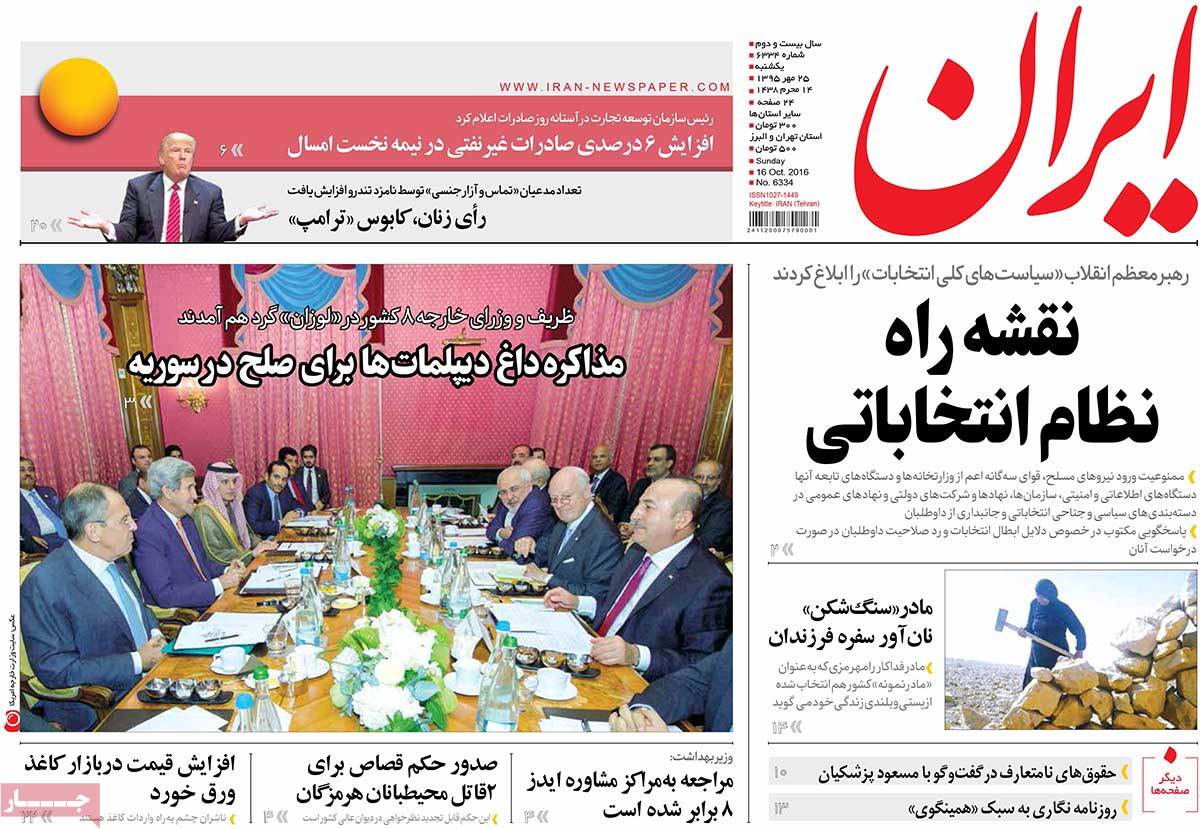 1- Obama Warns of Trump’s Riot after US Presidential Elections

2- Ultimatum in Lausanne: Talks between 5+4 for a Ceasefire in Syria Started without Any Hope for an Opening

3- Reformist Figure: We No Longer Support Rouhani with Closed Eyes; Reformists Doubtful about Their Support for Rouhani in 2017 Election 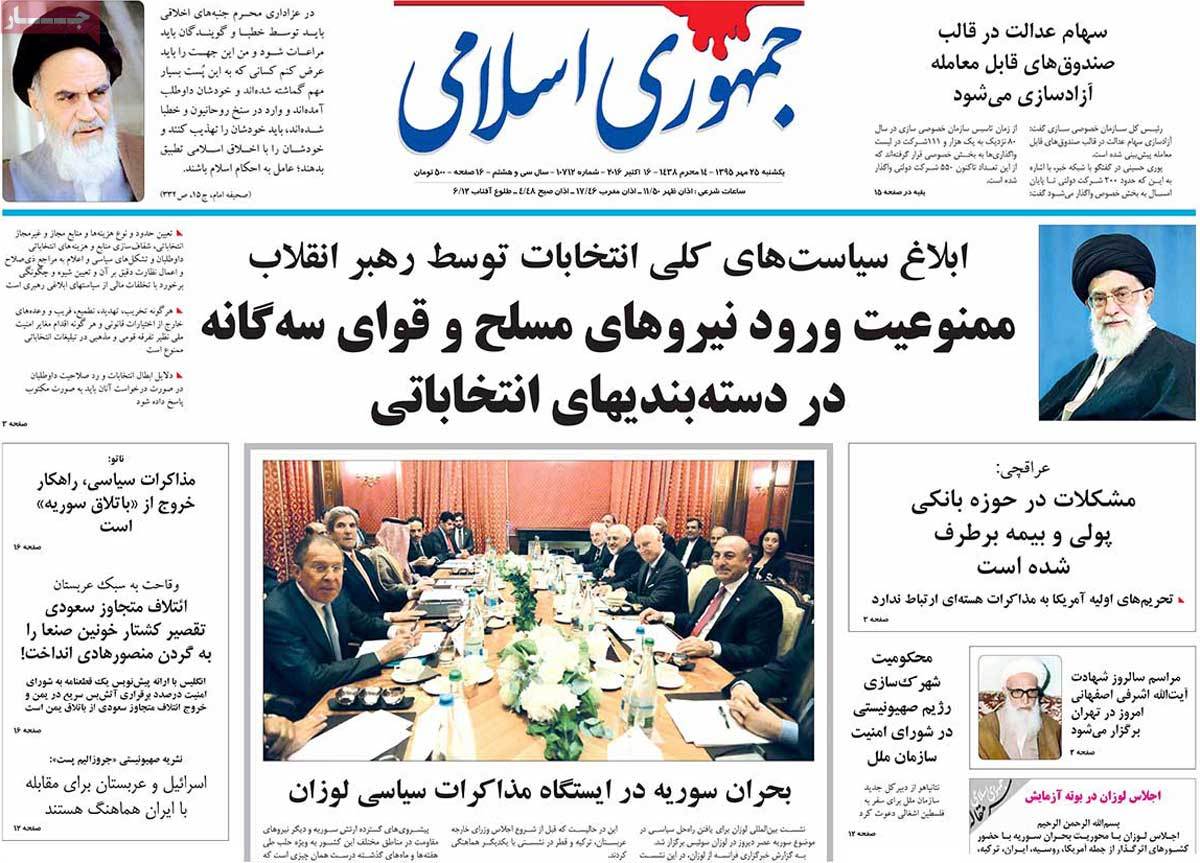 1- Central Bank Governor: Current Situation, Compared with Pre-JCPOA Era, Is Not at All Satisfactory

3- US Failure in Syria War, the Operation of Deceit in Lausanne

1- Leader Calls for Maximum Transparency, Speed, and Health of Elections 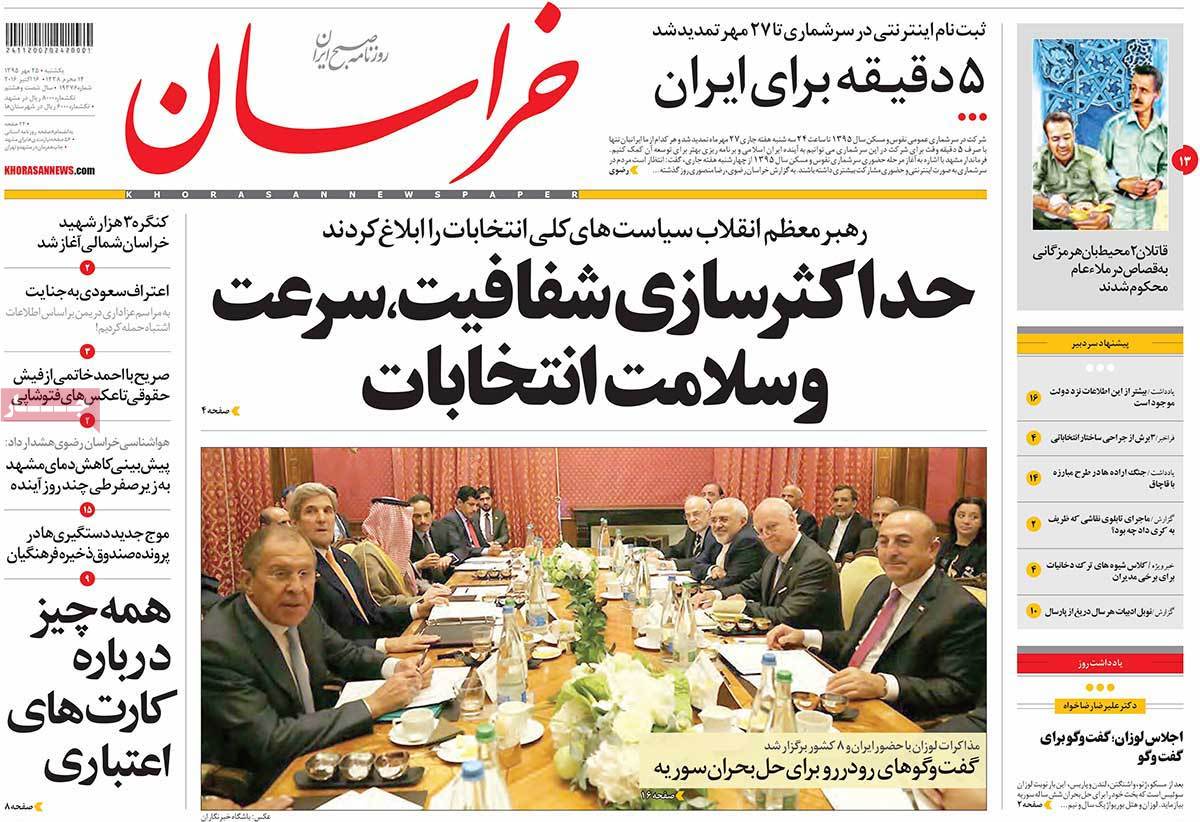 1- Leader: Protecting People’s Vote Is a Must in Elections; Candidates Banned from Using Foreigners’ Support and Facilities

3- Latest Remarks by Wendy Sherman about Nuclear Deal: We Didn’t Expect Nuclear Deal to Change Iran’s Behaviour in Fields Other than Its Nuclear Program 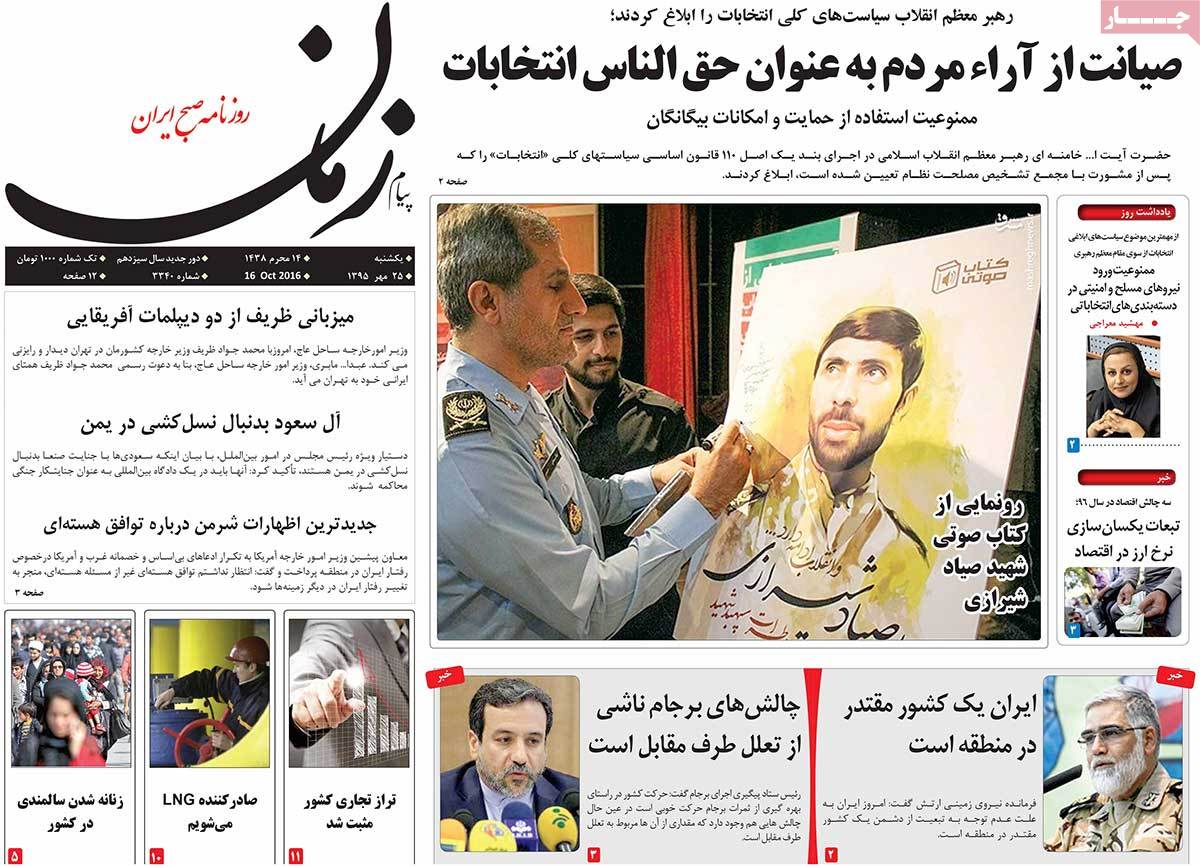 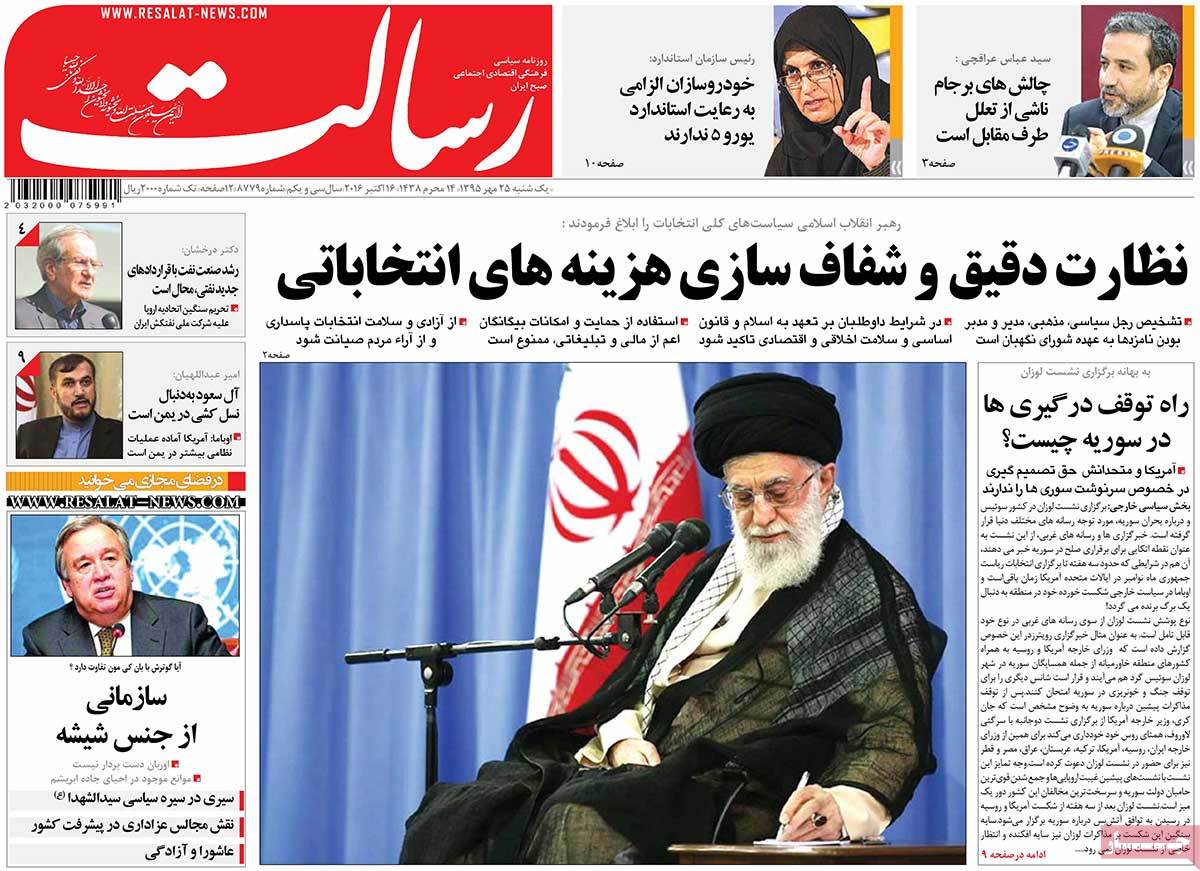 2- Army Ground Force Commander: Iran Is a Powerful Country in the Middle East 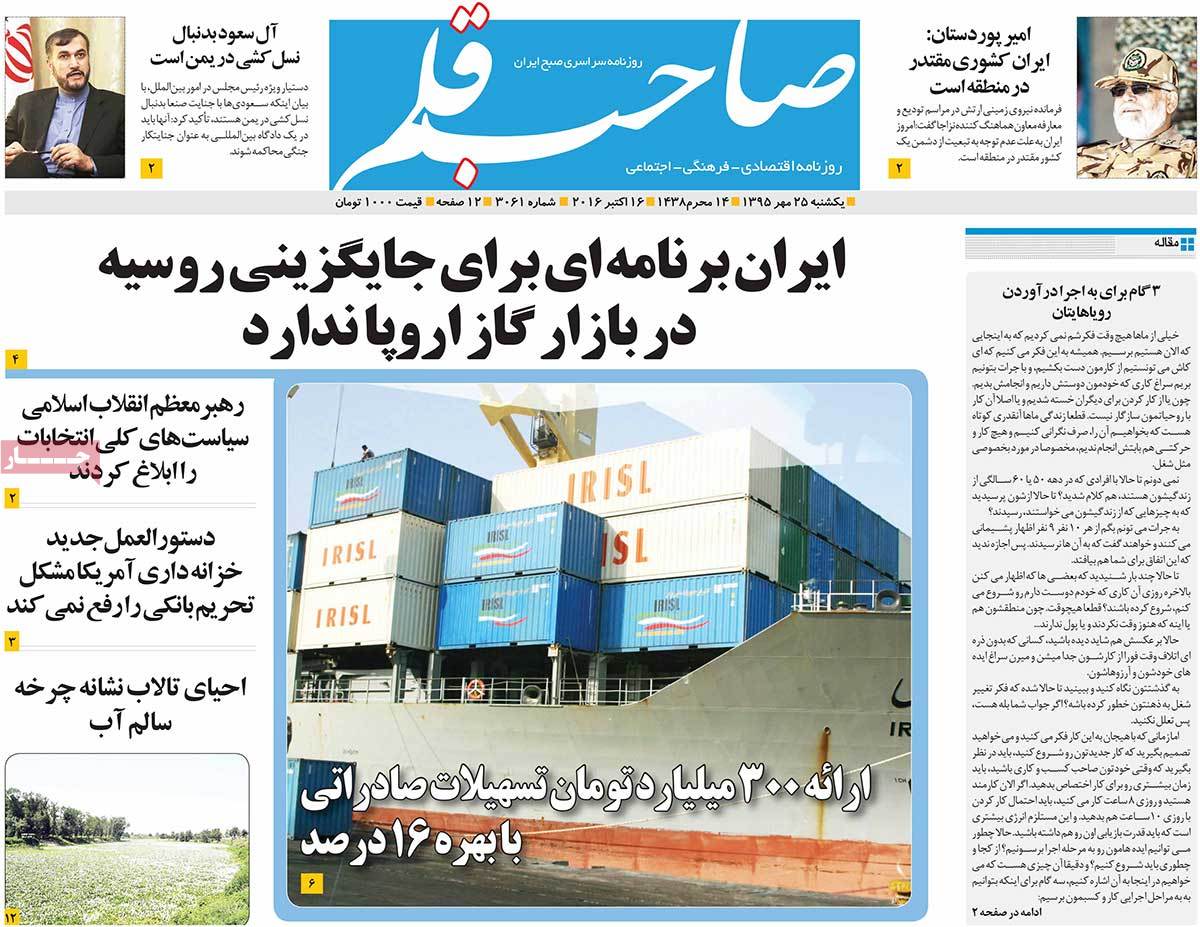 2- Ayatollah Rafsanjani Warns: It’d Be Difficult to Control a Possible Confrontation between US and Russia 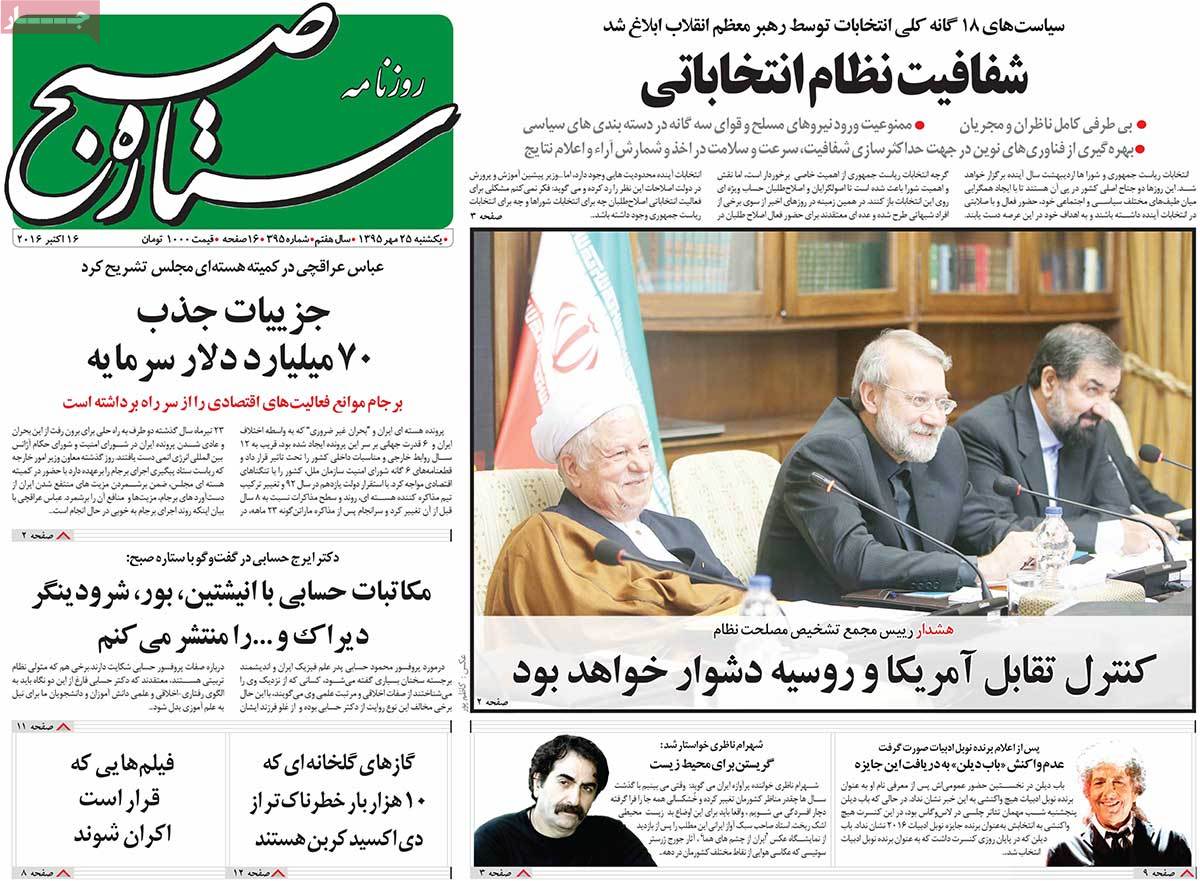 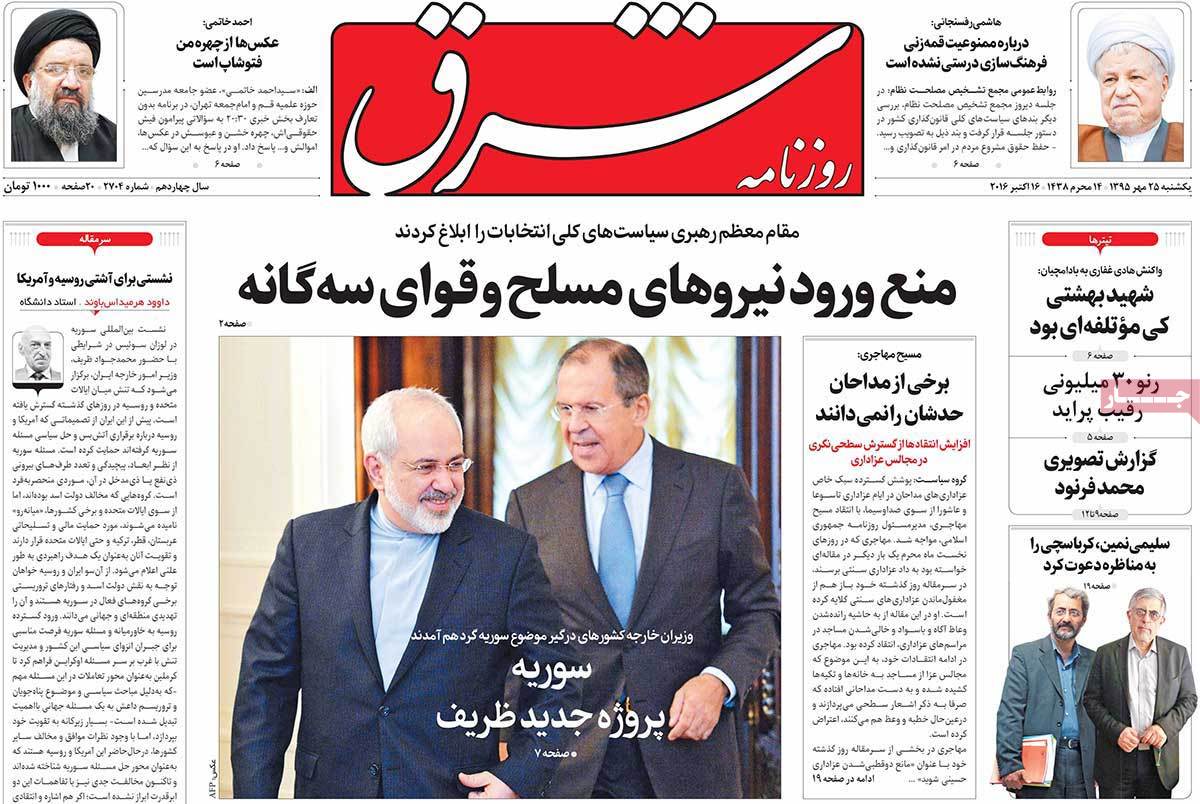 1- There’ll Be No Collusion: Lausanne Meeting, a Summit Aimed at Continuation of Pressure 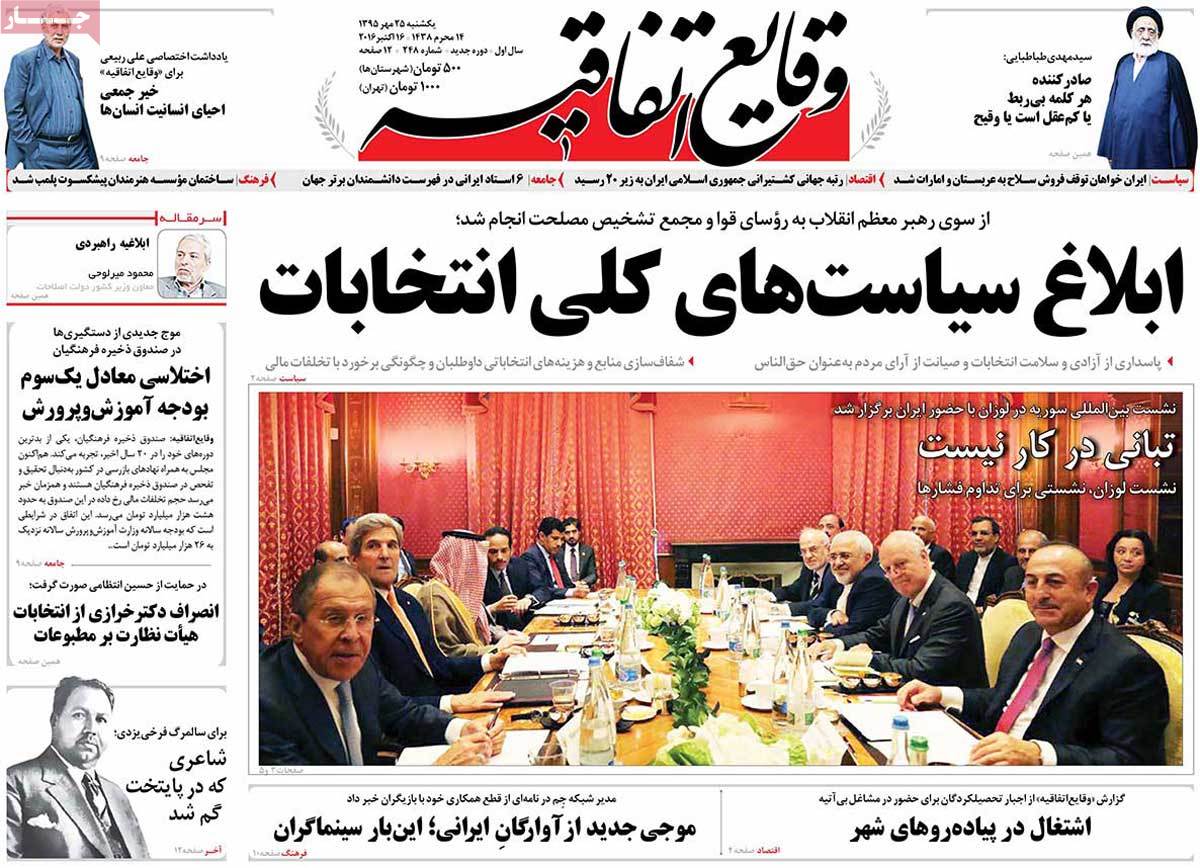