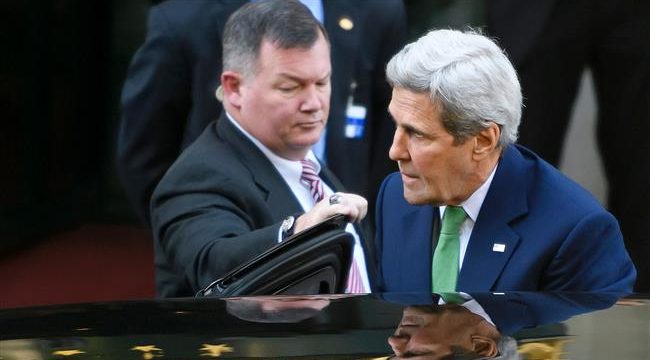 Syria talks kick off in Lausanne

Talks have begun in the Swiss city of Lausanne on a resolution to the crisis in Syria, with US Secretary of State John Kerry and Russian Foreign Minister Sergei Lavrov in attendance.

A US official said on Saturday that the negotiations had kicked off with the aim of finding a political settlement to the crisis.

Iran and Russia support the government of Syrian President Bashar al-Assad. The Saudi regime, Turkey and Qatar have been backing the opposition.

The United States has promoted the meeting as the latest attempt at international level to find ways of putting an end to more than five years of conflict in Syria. The Syrian government says Washington has been trying to stage such negotiations to facilitate truce deals and buy more time for anti-government militants.

Lavrov reportedly had a brief meeting with Kerry at a Lausanne hotel before the two were to take part in the main meeting. The 40-minute meeting was the first since Washington halted a bilateral push with Moscow for peace in Syria last month.

The United States has objected to Russia’s assistance to Syria’s massive operation against militants in the northwestern city of Aleppo, saying the help has undermined peace efforts for Syria. Moscow has rejected the US allegation, while it still is in close contact with Washington.

Lavrov said on Friday that he had “no special expectations” for the Lausanne talks, adding that Moscow had not yet witnessed reciprocal steps from its Western partners.

“We want to get down to concrete work and see how well our partners observe the UN Security Council resolution (on Syria). We are not going to propose anything else,” Lavrov said.

The UN Security Council’s most recent resolution on the conflict in Syria, which came in December 2015, reiterates that “the only sustainable solution to the current crisis in Syria is through an inclusive and Syrian-led political process that meets the legitimate aspirations of the Syrian people.”

A Tale of Peace Talks

Warring sides and stakeholders in the conflict in Syria have attended three rounds of negotiations under the auspices of the United Nations in the Swiss city of Geneva, with all of the talks ending in failure.

The last time such talks were held was on February 1, although the meeting was formally suspended only two days later.

The United States and Russia, as co-chairs of the so-called International Syria Support Group, then managed to engineer a series of nationwide ceasefires in Syria beginning from mid-February, but all those initiatives failed due to differences between the two powers on which militant groups should be excluded from the truce agreements.