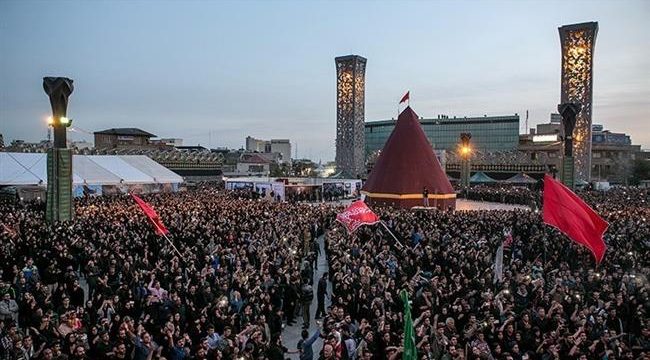 Millions of Shia Muslims in Iran and other parts of the world are commemorating Ashura, which marks the martyrdom anniversary of Imam Hussein (PBUH), the third Shia Imam.

The faithful have converged on the streets and in mosques with heavy hearts to honor Ashura, the 10th day of the first month of the Islamic lunar calendar Muharram, which is the climax of the mourning processions.

During the ceremonies, eulogies are recited and sermons delivered in memory of Imam Hussein and his 72 companions.

Passion plays are also staged in remembrance of the suffering imposed on the venerated figure of Shia Islam and his companions, who refused to pledge allegiance to the Umayyad caliph, Yazid I. Imam Hussein and his group were martyred in the Battle of Karbala, in southern Iraq in 680 AD, while fighting courageously against the 100,000-strong army of the despot.

During Muharram, benefactors cook and distribute food offerings among neighbors, family and the needy. Free food is also offered to people who take part in mourning ceremonies.

Large numbers of black-clad Iraqi and Iranian mourners plus people from other countries have also flocked to the Iraqi cities of Najaf and Karbala, which is home to Imam Hussein’s holy shrine, to attend mourning rituals.

Mourning processions are also underway in Afghanistan, Pakistan, the Republic of Azerbaijan and Lebanon. Similar ceremonies are scheduled to be held in Europe, America and Africa later in the day.

On the eve of Ashura, known as Tasu’a, Shia Muslims across the world paid special tribute to Abbas ibn Ali, the half-brother of Imam Hussein, because of his sacrifices in the Battle of Karbala.

Following Imam Hussein’s martyrdom, his remaining family members, mainly women and children, were taken captive and transferred to the then Levant. His sister, Zeinab (PBUH), later delivered an eloquent sermon in the court of Yazid, which proved the righteousness of the Shia Imam and the mendacity of the tyrant.

Muharram ceremonies represent the never-ending and unswerving stance of truth against falsehood and the humanity’s struggle against tyranny, the cause for which Imam Hussein sacrificed his life.