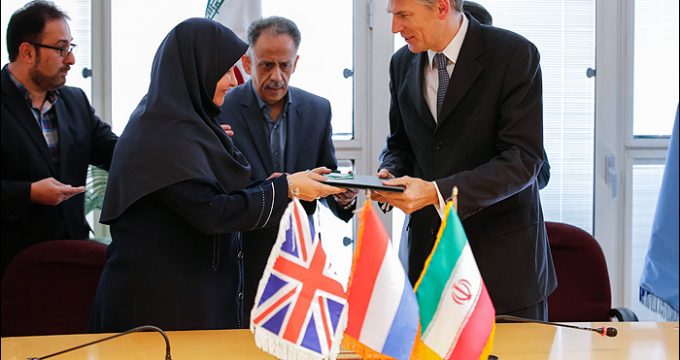 TEHRAN, Oct 10 (Shana) — A senior official with the Anglo-Dutch Royal Dutch Shell says his company has had intense talks with the National Petrochemical Company (NPC) for restoring its presence in Iran’s energy projects.

Speaking to Shana prior to signing a letter of intent (LoI) in Tehran on Sunday, Hans Nijkamp, Shell Vice President Iran, said “We have been in discussion with the NPC for some time to come to this Letter of Intent signing ceremony.”

He said it is really a document that is a result of very preliminary discussions the two companies have had about projects they could do together.

“We think we can work together with the NPC very well to deliver petrochemical projects in the country here. Shell is a company with a lot of experience in both advanced technologies, and project management skills and we are concentrated on local content when we do our work.”

He said gas-based cracker, diesel, and gas to liquids are some of the areas among many other things Shell can do in Iran.

“This LOI gives us the framework to have proper discussions with the NPC to have these detailed discussions on the confidentiality provisions and then decide what we will do together.”

He said more time is needed for signing an agreement with the NPC.

“An agreement always takes as long as it takes. So it is difficult to put an exact time on it. I think we first need to see what are the areas where we think we can work together and then work out what commercial structures we use, what technical solutions and ultimately you will indeed end up with a sort of a joint venture agreement. But it is too early today to put any timeline on that”.

He said, “We are very pleased that Iran is coming back to be a part of the global community. But it is still a fragile situation, however.”

He said there are still issues with banking that need to be resolved, and money transfer is very difficult. “The fact that I am here today means that we do see a very positive future for Iran and also for Shell in Iran.”

Nijkamp also said this is just the first step and there will be others as well and that they are also discussing with NIOC for an MoU there.

Also speaking during the ceremony, he said: “The document is a restart of what was quite a successful cooperation in the past which was unfortunately briefly interrupted by external events, but we are very pleased to be back here. Shell and the NPC have come together to carry out high level enhancements on the various quite substantial business opportunities that are there for both of us to work together, including GTL”.

He said what is really important about the petrochemical sector is its ability for significant job generation. Much more so than just upstream oil and gas can do. Multiply factor of a typical project with its derivative industries is about 160. So this really generates jobs for Iranians.

The Shell official also said his company also has a lot of license technology and can bring capital for investment and also quite deep project management skills in terms of how to get big and complicated and integrated projects done.

“We are not coming to Iran to stay for a while and carry out a number of projects and leave. If we want to do major projects it is going to take a long-term presence in Iran”.