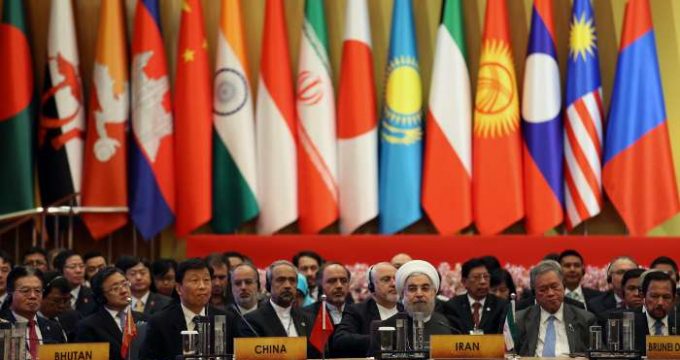 Iranian President Hassan Rouhani addressed the second Asia Cooperation Dialogue (ACD) summit in Thailand on Monday, saying “Asia’s power is dependent on self-confidence and a shared will for convergence.”

The President’s full address before the ACD Summit is as follows:

In the Name of Allah, the Most Beneficent, the Most Merciful
Your Excellency, Mr. Prayut Chan-o-cha,
Distinguished Prime Minster of the Kingdom of Thailand
Distinguished Heads of State or Government
Excellencies,
Ladies and Gentlemen,

At the outset, I would like to thank the Government of the Kingdom of Thailand for hosting the Second Summit of the Asia Cooperation Dialogue (ACD) as well as for the warm and cordial hospitality extended to my delegation and me. I hope that our constructive discussions and exchange of views could lead to further strengthening and promotion of this forum as one of the most important Asian fora.

I am pleased to speak in a forum, which is able to put our ancient continent on a path of increased success under the theme, “One Asia, Diverse Strengths” and work towards building an Asian community on the basis of the ACD Vision for Asia Cooperation 2030 as the common goal of all its members. It will be able to achieve this goal by collectively pursuing its overarching objectives of dialogue for cooperation in Asia, empowering communities through enhancing security, expanding education, reducing poverty, decreasing inflation, promoting the role of women in managerial positions and addressing environmental issues throughout Asia in an effective and extensive manner.
Today, all acknowledge that no global issues could be addressed without close cooperation of Asian powers. Asia plays a pivotal role in global efforts aimed at resolving such major issues as climate change, environmental crisis, social problems, including refugees, illiteracy and poverty; and the role of Asian states in promoting collective security is indispensable.

Asia’s power is dependent on self-confidence and a shared will for convergence. We must open our markets, engage in greater economic interaction, start domestic structural reform, move towards greater transparency and engage in extensive coordination on setting policy; and by doing so, take long strides to improve the quality of life for our citizens and elevate the standing of Asia on the world stage.

The long and rich history of Asian civilizations is a priceless heritage. Greater contact and cohesion between our nations translates into greater cultural growth, which is vital for the long term security and stability of the continent.

Iran is an integral part of Asia and a gateway that connects East to West. We have our roots in Asia and our history, culture and arts have been shaped by this ancient continent. We are committed to remain with Asia and continue to define our identity as Asians.

Deeply aware of the imperative of maintaining security and stability in Asia, the Islamic Republic of Iran believes that violence and extremism represent the most challenging crisis that has engulfed the whole Asian Continent from Tokyo to New Delhi and from Baghdad to Damascus to Istanbul. The security of the east and the west of this continent is indivisible; and the intervention and interference of big powers in both ends of Asia constitutes a major threat for all of us. Today, Iran stands up as a strong bulwark against the expansion and infiltration of extremism and terrorism in this extended region and reiterates that the illegal intervention has fueled violence and atrocities. One cannot talk about security and work towards cohesive development, while ignoring terrorist atrocities in Iraq and Syria, or remaining indifferent to the bombardment of defenseless women and children in Yemen as well as brutal behaviors of the Zionist regime in Palestine.

Asian spirit uses diplomacy and dialogue as its main tools to resolve hostilities. In meeting the challenges before us, our forum must continue to use the same tools.

Having secured the historic nuclear accord, the Islamic Republic of Iran is eager to participate actively in the value chain as well as develop new markets and provide secure supply of energy and consequently play an even more active role in Asian collaborations. Blessed with a young and educated work force, extensive oil and gas reserves and an advantageous geographical position, Iran has aimed at an annual 8 percent growth rate. In addition, attracting more foreign investment is one of Iran’s priorities. Therefore, we invite and welcome Asian investors and have prepared the ground for mutually advantageous projects. Due to the nuclear accord and the lifting of sanctions, Iran’s economy is poised to experience considerable growth in the coming years. Geographical advantage, security, and considerable investment in rail, air and sea lanes have secured the position of Iran as a major international corridor. At the same time, the Islamic Republic of Iran aims to play a more active role in the Asian-European transportation network. By developing its capacities, Iran is seeking to become a new hub in rail, air and sea transportation in West Asia.

As part of its main goals, the ACD works to expand cultural interaction and tourism among Asian communities. Again, drawing on its natural, cultural and historic attractions, Iran is trying to utilize its tourism industry as a main prime mover of the economy.
Globally, a secure supply of energy is a major challenge to sustainable development. Iran is ready – through multilateral investment schemes and the expansion of its natural gas sector – to increase the security of the energy supply in Asia and promote natural gas as a clean and alternative fuel that serves to improve the environment.

Security and stability are the prerequisites for development. At the same time, development is imperative for ensuring security and stability. Through comprehensive development, living conditions improve and cultural diversity – as well as the rights of fellow human beings – is respected. The ACD can help expand trade and economic cooperation and by connecting the east and west of Asia create a promising vision of peace, tranquility and stability throughout the continent; and by doing so create a better future for all inhabitants of Asia.

The future of Asia belongs to our children and grandchildren, and its full blossoming depends on more stable and dynamic ties among the Asian nations. Cognizant of this, my administration is committed to expanding trade as well as scientific, cultural and technological ties between the Iranian nation and Asian communities and by doing so – as an influential member of the Asia Cooperation Dialogue — we will positively contribute to the ongoing efforts to transform this ancient continent to a powerhouse for global progress.