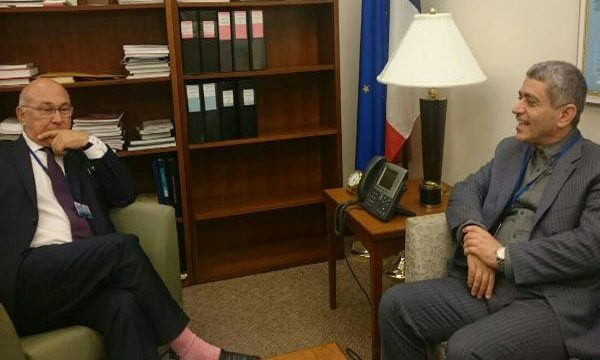 TEHRAN, Oct. 10 (MNA) – France finance minister said his country is holding talks with the US to provide grounds for expansion of Tehran-Paris banking ties.

Speaking with his French counterpart Michel Sapin on the sidelines of World Bank-IMF Annual Meetings 2016 in Washington DC., Iran’s Economy Minister Ali Tayebnia pointed to the country’s serious determination to boost relations with European states emphasizing “European sides are required to meet obligations under the Joint Comprehensive Plan of Action (JCPOA) and run broker relations with Iranian banks as a prerequisite to development of trade and cooperation.”

Tayebnia referred to the government’s achievements in reducing reliance on oil revenues as well as in making various investments and achieving economic stability asserting “given the imposed limitations by the US, major countries like France could help remove the barriers to the interest of all parties.”

He outlined Iran as the pioneer of the fight against terrorism emphasizing “undoubtedly, bolstering of international economic relations and poverty reduction remain as primary means of fighting violence and terrorism.”

The official suggested elevation of trade turnover as a way of reinvigorating ties; “in the banking sector, France is conducting negotiations with Americans.”

He expressed hope that grounds will be prepared for strengthening banking relation between Iranian and European banks similar to the case of Iran’s purchase of Boeing aircraft which was coordinated by the US.

“We feel strongly committed to JCPOA obligations and existing problems would not interfere with France’s determination in this regard,” Sapin continued.

In a separate meeting, Iran’s Tayebnia met and talked with Lilianne Ploumen, Minister for Foreign Trade and Development Cooperation of the Netherlands.

During the meeting, the Iranian noted that ties between Iran and the Netherlands should not be restricted to the energy sector as it can be expanded to areas like agriculture or financing.

The official recalled earlier negotiations between officials of the two sides saying “the Netherland’s initiative to deepen relations with Iran is a sign its serious political determination and excellent opportunities exist especially in the field of technical knowledge transfer.”

Tayebnia also suggested formation of a joint working group in line with expansion of collaborations which was welcomed by the Dutch side.

Iran’s economy minister went on to enumerate several venues for joint cooperation between the two countries including banking and insurance activities as well as allocation of credit lines.

Also at the meeting, Lilianne Ploumen of the Netherlands touched upon Iran’s strategic position and its effective role in regional developments; “Iran is able to make a trustworthy trade partner for the Netherlands similar to the past.”

He underscored that his country’s willingness to develop cooperation with Iran is a serious intention rather than a mere diplomatic gesture; “accordingly, the Dutch government is preparing major proposals in various arenas.”

He called for immediate action, smart planning and alleviation of remaining obstacles arose from the sanctions as gateways to operational phase of bilateral economic cooperation.