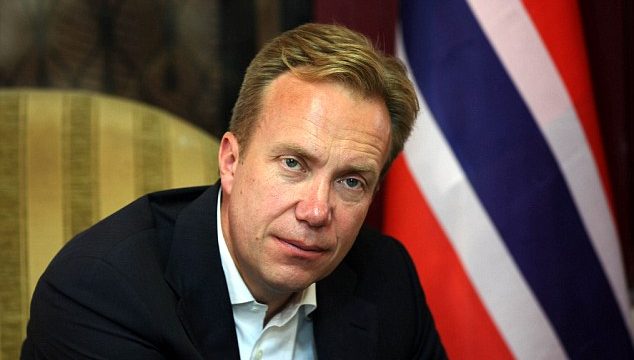 Norway says it has opened a credit line worth $1 billion to support its companies with their Iran export plans.

The announcement was made by Norway’s Foreign Minister Børge Brende in a meeting with Iran’s Economy Minister Ali Tayebnia in a meeting on the sidelines of World Bank-IMF Annual Meetings 2016 in Washington D.C.

“Norway encourages its companies, banks and monetary institutions to launch cooperation with Iran,” said Brende. “An export credit line worth one million dollars has been allocated to Norwegian companies $400 million of which have been used to export advanced technologies to Iran,” the official was quoted as saying by Iran’s Mehr News Agency.

Brende further emphasized that Iran could make an excellent trade partner given its high stability and political security as well as the upward trend of its economic growth.

Tayebnia, for his part, described the current economic relations between Iran and Norway as satisfactory.

Tayebnia also called for signing of fundamental deals between the two countries like the agreement of avoidance of double taxation as well as customs and investment contracts.

Norway’s Statoil teamed up with Iran’s Petropars over the development of Phases 6, 7 and 8 of Iran’s South Pars oil field and completed the project in 2009.  Another Norwegian company – Hydro – had teamed up with Russia’s Lukoil to explore Khorramabad oil bloc in western Iran. The project led to the discovery of Anaran oil field in 2005.  Both companies had to leave Iran after a series of US-led draconian economic sanctions were imposed on Iran over the later years.

The sanctions were lifted in January 2016 after a deal between Iran and the so-called P5+1 group of countries over the Iranian nuclear energy program came into effect.

The bans prevented foreign companies from investing in Iran’s economy or buying Iran’s crude oil among many other restrictions.