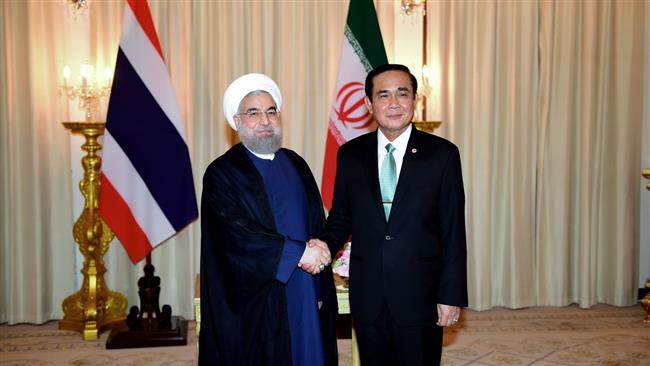 Iran and Thailand have expressed their readiness to open a new chapter in Tehran-Bangkok relations in different fields.

Iran’s President Hassan Rouhani and Thai counterpart Prime Minister Prayuth Chan-o-cha made the remarks in a meeting held on the sidelines of the 2nd Asia Cooperation Dialogue (ACD) summit in Bangkok on Sunday.

“Today, the two governments are willing to broaden bilateral ties in the political, economic, cultural and scientific areas,” Rouhani said, adding, “The expansion and reinforcement of relations between Iran and Thailand both serves the interests of the two nations and is supplementary to regional cooperation.”

Thailand can serve as an economic bridge between Iran and East Asia, said Rouhani, calling for a more active participation of private sectors of both countries in efforts to promote Tehran-Bangkok cooperation.

The Iranian chief executive further underlined the need for bolstering banking cooperation between the two states as a step towards fostering economic ties.

Iran and Thailand could soon double the level of their trade exchanges by implementing agreements and joint projects, Rouhani added.

The Thai premier, for his part, underscored the necessity for opening a new page in Tehran-Bangkok relations.

Prayuth also stressed that the Thai government is resolved to boost cooperation with Iran and noted that bilateral educational, cultural and scientific ties should be expanded at the same pace as political and economic relations between the two sides.

President Rouhani’s visit to Thailand is part of his Southeast Asian tour that took him to Vietnam and Malaysia earlier this week.

According to Thai Ministry of Foreign Affairs, trade value among Tehran and Bangkok stands at around $794.46 million.