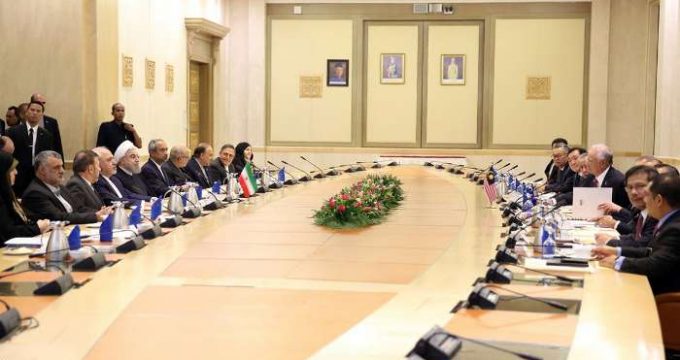 TEHRAN, Oct. 08 (MNA) – President Rouhani stressing the need for strengthening the unity and brotherhood among all Muslims, said Muslim countries should help oppressed Palestinian people and the people of other Islamic countries.

Speaking during a meeting of the two countries’ high-ranking delegations held in Malaysian prime minister’s Palace late on Friday, Rouhani underlined the Islamic Republic is willing to expand and deepen cooperation, especially in the post-JCPOA era, with Asian countries, including Malaysia.

Pointing to the presence of major European and Asian public and private companies in Iran during recent months and the signing of agreements and MoUs, Rouhani noted that the post-JCPOA era and the removal of sanctions has opened a new chapter in cooperation and improving relations between Iran and Asian friends. He also stressed the importance of bolstering relations with Asian countries.

“Ties with Asia including the friendly and brotherly country of Malaysia have a special position in the Islamic Republic of Iran’s foreign policy,” Rouhani said.

Pointing out that the opportunity is provided for the presence and investment of Malaysian companies in various fields of energy, transportation and industry, President Rouhani described the cooperation between the commercial banks of the two sides and the development of correspondent banking relationships as a foundation to mobilize economic relations.

Rouhani underlined that Iran welcomes investment by the Malaysian firms in the sectors of oil, gas and petrochemicals.

He highly regarded the post-sanctions environment for investment and cooperation, saying it needs both Iran and Malaysia’s support and facilitation.

Elsewhere is his comments, Rouhani said the two countries regard terrorism as a common concern in the region and across the world and believe that “governments and countries must make use of all means available in the fight against terrorism.”

Rouhani underlined that both Tehran and Kuala Lumpur, concerned about enemies’ moves to sow discord among Muslim countries, believe that all Islamic faiths have a common goal and emanate from a single root and origin.

Malaysian Prime Minister Datuk Seri Najib Razak, for his part, expressed his country’s full support for expansion of relations with Iran stressing, “Malaysia sees no obstacle to develop and strengthen comprehensive ties with Iran and considers banking cooperation as the key to the development of economic relations.” He underlined that barriers in this area should be resolved as soon as possible.

Pointing to the remarks made by President Rouhani, Najib Razak said Tehran and Kuala Lumpur must restore their bilateral relations to pre-sanctions level and swiftly double the level of their trade exchanges.

He called for strengthening cooperation in the field of tourism, halal food industry and the exchange of students and teachers.

Malaysian prime minister also outlined the scourge of terrorism a common concern in the region and the world and stressed the need for cooperation of all countries in the fight against terrorism.