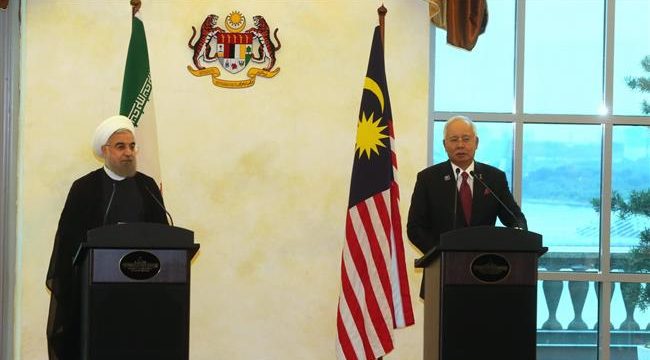 Iranian President Hassan Rouhani says the Islamic Republic and Malaysia plan to swiftly double the level of their trade exchanges.

Speaking at a joint press conference with Malaysian Prime Minister Najib Razak in Kuala Lumpur on Friday, the Iranian president added that the two countries are in the first phase resolved to restore their bilateral relations to pre-sanctions levels then promptly double it.

“We also plan to turn 2016 into the year of development in improvement and expansion of mutual ties in economic, political, scientific and cultural fields,” he added.

He added that the BNM and CBI officials would meet in the near future to discuss ways of developing strategies for efficient trade cooperation.

Speaking to reporters after holding closed-door talks with the Malaysian premier and participating in the meeting of the two countries’ high-ranking delegations, Rouhani said Tehran and Kuala Lumpur are concerned about enemies’ moves to sow discord among Muslim countries.

“We both believe that all Islamic faiths have a common goal and emanate from a single root and origin,” he added.

He said the two countries regard terrorism as a common concern in the region and across the world and believe that “governments and countries must make use of all means [available] in the fight against terrorism.”

He also stressed the importance of bolstering relations with Asian countries.

“Ties with Asia including the friendly and brotherly country of Malaysia have a special position in the Islamic Republic of Iran’s foreign policy,” Rouhani said.

There is a “very good climate” for activities and investment by Iranians in Malaysia, he said, adding that Tehran and Kuala Lumpur are both supporting investments by the other country on their soil.

“Iran welcomes investment by the Malaysian firms in the sectors of oil, gas and petrochemistry,” he said.

He also called for the acceleration of cooperation between the two countries in banking, academic, technological and tourist fields.

The Iranian president arrived in Malaysia Friday morning on the second leg of a three-nation tour of Southeast Asia. The trip has so far taken him to the Vietnamese capital of Hanoi and will be concluded in Thailand.

He plans to attend a summit of the inter-governmental organization of Asia Cooperation Dialogue (ACD), which gathers 34 Asian nations, in the Thai capital of Bangkok.