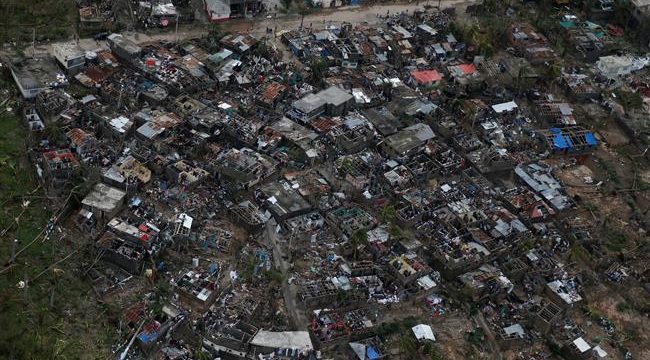 Death toll from Hurricane Matthew in Haiti rises to 339

Haitian government officials say the death toll from Hurricane Matthew in the impoverished Caribbean country has soared to at least 339, suggesting that the figure could rise as the scope of destruction from the natural calamity is becoming clear.

The officials announced the death toll on Thursday, marking a sharp increase from the 23 deaths previously reported as aid workers are just beginning to reach the storm-ravaged western part of the poorest nation in the Western Hemisphere.

Aerial footage of the city of Jeremie on the northwestern coast of the country and the capital city of Grand’Anse Department showed hundreds of flattened houses and deserted streets strewn with debris.

“It’s complete destruction in Jeremie. About 80 percent of the buildings are gone. All phone lines and electricity are gone. Access is completely cut off, and everyone is running out of food and money,” CARE Haiti Director Jean-Michel Vigreux wrote in a message posted on his Twitter page.

Margaret Traub, the head of global initiatives with the aid group International Medical Corps, also said “almost every structure is damaged or destroyed” in the devastated port city of Les Cayes.

Traub said she flew over miles of flattened farmland to arrive in the city by helicopter because roads to the region have been washed out.

“The whole area is seeing heavy disruption. Power lines are down. Trees are down. Rivers are flooded. Bridges are out,” she said.

Traub added, “People are in need of food, clean water and shelter. We’re especially worried about access to clean water, because we’re very concerned about diseases.”

Haitian authorities say at least 28,000 homes have been damaged in the aftermath of Hurricane Matthew.

The United Nations says at least 350,000 people are in urgent need of assistance, including food and clean water.

On Wednesday, the Haitian Electoral Council postponed the presidential election, initially scheduled for October 9, amid destruction caused by Hurricane Matthew. The council, however, did not set a new date for the poll.

“In the southern region, we already know that many buildings have lost their roofs and some of them were going to be voting centers,” Leopold Berlanger, the Haitian Electoral Council’s president, said.

Poll workers may also be among the victims or those left homeless by the hurricane, he added.

Meanwhile, health officials in Haiti are gearing up for a potential uptick in cholera cases in the wake of Hurricane Matthew.

“Due to massive flooding and its impact on water and sanitation infrastructure, cholera cases are expected to surge after Hurricane Matthew and through the normal rainy season until the start of 2017,” the Pan American Health Organization (PAHO) said in a statement on Thursday.

PAHO further noted that nine of Haiti’s 15 main hospitals are running in the wake of the storm.

“In these areas, usually with poor access to water and sanitation, where there are high attack rates and high case fatality rates, PAHO will implement targeted interventions to minimize the surge in cases of cholera,” the international public health agency said.

Hurricane Matthew is described as the worst natural disaster to hit Haiti since the devastating earthquake of 2010.

The storm is currently a catastrophic Category 4 with maximum sustained winds of 225 kilometers per hour, according to the US National Hurricane Center.