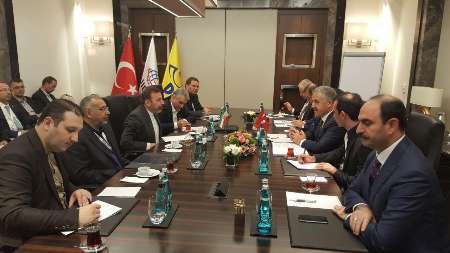 In a meeting with Minister of Transport, Maritime and Communications Ahmet Arslan, he referred to the two countries’ historic ties and voiced Iran’s supports for the Turkish government and nation.

Iran condemns undemocratic moves such as filed coup in Turkey, he said, noting that the Iranian officials are pursuing development seriously.

The Iranian minister also called for enhancement of cooperation in all fields.

Stressing the need for organizing cooperation in the sphere of road transportation on the two countries’ borders, Vaezi urged removing obstacles in the field and holding the Eighth Meeting of Iran-Turkey Joint Transportation Commission in Tehran at the earliest.

Arslan, for his part, appreciated Iran’s supports to the Turkish government, saying that Iran is a friend and neighbor of Turkey and it will never forget Iran’s role in difficult times.

Pointing to numerous commonalities between the two countries, he said, ‘We should remove obstacles in the way of boosting ties.’

Turkey is keen on connection of the two countries’ optical fiber network, he said, voicing his country’s readiness for cooperation with Iran to promote transit transport.

Arslan also said that he is willing to visit Tehran in near future.

Vaezi arrived in Istanbul on Monday at the head of delegation to attend General Assembly and Ministerial Congress of Universal Postal Union (UPU).

The 26th congress of UPU opened in Istanbul on September 20 and will continue until October 7.

Postal Union Congress is held every four years. The 25th congress was held in Doha in 2012.