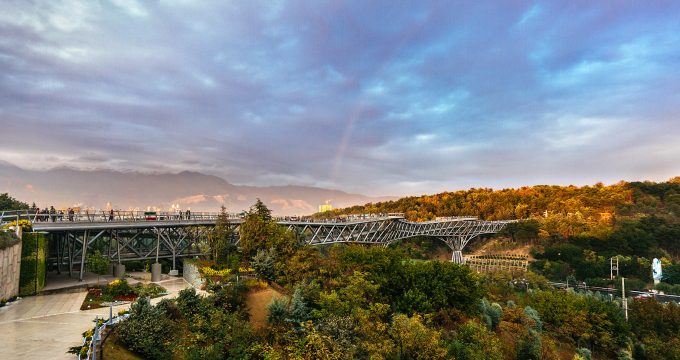 Iran’s largest pedestrian bridge is among the six winners of this year’s $1 million Aga Khan Award for Architecture.

Tabiat Pedestrian Bridge, a pink rubberised park by BIG, Zaha Hadid’s first building in Lebanon, a labyrinthine community centre and a perforated brick mosque, both in Bangladesh, and a library in a Beijing hutong are the winners of the triennial architecture award this year.

The architects of each project will receive a share of a $1 million (£700,000) fund, which makes the Aga Khan Award for Architecture one of the world’s most lucrative architecture prizes. The six projects – located in Bangladesh, Denmark, China, Iran and Lebanon – were selected from a shortlist of 19 projects unveiled in May 2016.

They were chosen by a committee including architects Emre Arolat, David Adjaye and Dominique Perrault, and the Aga Khan himself.

It was an imaginative leap beyond the basic competition brief of designing a bridge to connect two parks separated by a highway in northern Tehran, without blocking the view to the Alborz Mountains.

The structural elements are based on a latent geometrical order rotated and repeated in three dimensions. The result is a spatial structure large enough to create an inhabitable architectural space, where people congregate, eat and rest rather than just pass through.

Multiple paths in each park were created that would lead people on to the bridge. Seating, green spaces and kiosks encourage people to linger on a site where greenery has been preserved by the minimal footprint of the bridge, whose curve offers a variety of viewing perspectives.

The Aga Khan Award for Architecture was set up by the Aga Khan in 1977 to acknowledge and encourage projects that address the needs of Muslims the world over.

A ceremony will be held for the winners of the 2016 award at the Al Jahili Fort – a World Heritage Site in Al Ain that itself received the Aga Khan Award for Architecture in 2007 following a significant renovation.