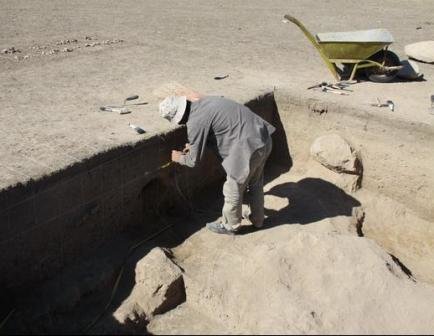 Ali Behnia, local official of Cultural Heritage Research Center told reporters on Tuesday that the hill had been registered on the national heritage list in 1998; “the difficulties of protecting the ancient hill rise from the illegal expropriations of land in the vicinity of the hill; the housing schemes have exacerbated the problem, with levelling operations threatening the site,” he added. “Archaeology Research Center thus carried out a project to demarcate the hill with agreement of the local office; accordingly, 13 excavations delved deep into the history of the region and found valuable items from historical and Islamic times; the tombs contain human bones, a skull, remains of brick and stone architecture, along with pottery bearing parallel scriptures belonging to the Islamic periods,” he detailed.

Still in a related story, this time in the northwest of the country, the repair and reconstruction of Qoban, a Timurid fort in Makou, will start in upcoming month of November. Ali Khorablou, head of local Cultural Heritage office told reporters.

“The reconstruction will be a joint venture of Cultural Heritage Organization and Makou Free Zone Organization; the tentative repairs had revived the bath, towers, and parts of walls during past decade; the natural weathering had ruined the major bulwarks of the fort, where the repair has been started,” Khorablou added.

He also said that the first season of an archaeological investigation would examine the fort in upcoming month; “tunnels lead to the highest point of the fort, leading the viewers in tortuous and difficult crosses; the evidence shows that tunnels functioned as hidden paths for scape in times of emergency,” said the official.