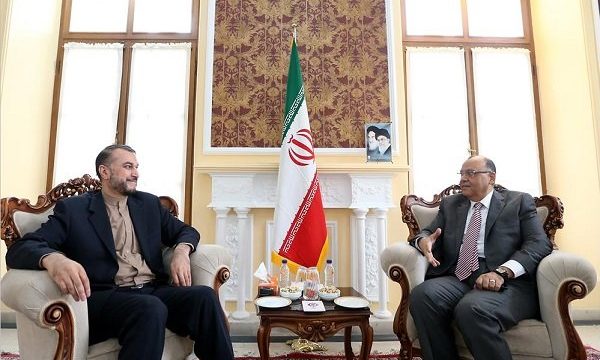 Palestine ‘still critical issue’ in ME

Hossein Amir-Abdollahian and Mr. Yasser el-Usman discussed prospects of improved ties between Iran and Egypt. Iranian side believed that bilateral ties had fluctuated within recent 37 years, however turned to better quite recently, with inter-Parliamentary friendship group and occasional visits to Tehran and Cairo; “Parliament welcomes working with Egyptian colleagues in solving pressing issues especially the issue of Palestine in close collaboration; it is one of the major issues, albeit a hefty one, within context of the Middle East where diverse factors have complex interplay in forming the current situation,” he told Egyptian official. “Egypt had been the major player in Palestinian issue, with border crosses occasionally opened to allow humanitarian aid to Gaza Strip.”

Amir-Abdollahian believed Iran and Egypt could work together to exhaust potentials of two major countries in Islamic world in defeating terrorism and extremism as well. “Iran supports any action which brings stability to Syria; in that crisis, the US had been only paying lip service to fighting terrorism, supporting in action terrorists,” he told the meeting.

Mr. el-Usman, for his part, said his mission would be a happy one in Tehran; “we invest much hope in a détente between two nations, which my mission wages efforts to; I share your view that Iran and Egypt would help the region out of the crisis and extremism; crimes committed in Syria, Yemen, and Libya are quite disturbing and only solidarity of Muslim nations would be the remedy to atrocities in the region,” he concluded.

Since 1979, Iran and Egypt have had cold relations, since Egypt had hosted the deposed Mohammad Reza Pahlavi. The growth of Arab nationalism and pan-Arabism also contributed to ice-cold relations in the past four decades. With the Arab Spring which toppled Mubarak’s autocratic rule in Egypt and election of Islamist candidate Mohammed Morsi to the presidency in 2012, Iran waged laudable efforts to break the ice in relations, with Mr. Ahmadinejad, then president visiting Cairo. The downing of the government by the army and arrest of many of Islamist Muslim Brothers cadres however turned the tide and Tehran was again to wait for a special moment to revive relations with a country viewed from Tehran the major Arab country of some prestige and one that once ruled the Arab hearts and minds.