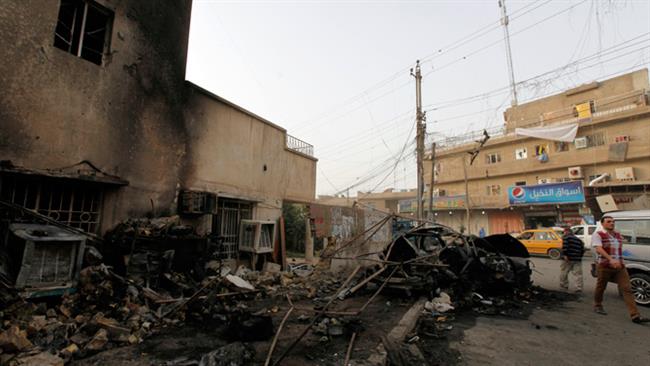 A string of bomb explosions has struck the Shia-majority areas of the Iraqi capital of Baghdad, killing at least 15 people and wounding 40 others, security sources say.

Iraqi officials said on Monday that an attacker detonated his explosives in the southwestern Shia neighborhood of Amil, killing at least seven people and wounding over two dozen others.

Separately, at least five people were killed and 15 others wounded after another bomber detonated his explosives in the eastern neighborhood of Mashtal.

At least three more civilians were killed and 10 others wounded in a bomb explosion in a commercial area in the northern Sabi al-Bor area.

No group has claimed responsibility for the attacks yet, but they bear the hallmarks of the Daesh Takfiri group.

The attacks come as Iraqi forces are preparing for an offensive to retake the northern city of Mosul from terrorists.

The Daesh terrorist group took over large swathes of territory in Iraq in the summer of 2014.

Iraqi army troops, backed by fighters from allied Popular Mobilization Units, have been engaged in military operations to win back regions held by Daesh and have managed to liberate most of these areas.

The militants have been committing heinous crimes against all ethnic and religious communities in the northern and western parts of Iraq.

The United Nations (UN) says more than 1,000 people lost their lives and over 1,500 others suffered injuries as a result of acts of terrorism and violence across Iraq in September 2016 alone.