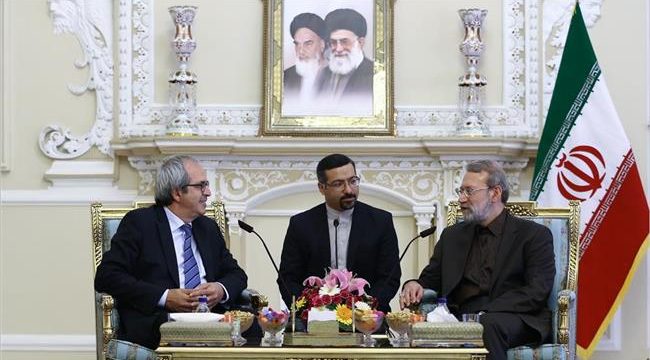 TEHRAN, Oct. 02 (MNA) – Iran’s Ali Larijani has criticized the west’s general negligence of the Zionist crimes in Palestine and Saudi crimes in Yemen.

Larijani believed charges levelled by the west against Iran of interference in the region were unacceptable, while they systematically failed to see the Zionists’ crimes in Palestine during past 7 decades or Saudi Arabian crimes in Yemen of recent times; “Charges of violation of human rights against Iran are unfounded; the US uses human rights as instrumental to its regional interests and turns a blind eye on crimes and violations of human rights by its allies notably Arab states in the region, especially in recent months antics of Saudi Arabia in Yemen which amounted to war crimes,” he told the meeting.

“So, we believe the international community lacks strong will and seriousness in fighting terrorism.”

Larijani also denounced US and some other countries’ conduct in Syria where they insisted Al-Nusra Front be listed as legitimate opposition to Assad government, while the group is a cacophonous mass of extremist and fanatics and heirs of Al-Qaeda, with the clear consequence that their support for the group would exacerbate the situation in Syria.

Mr. Dirk van der Maelen, for his part, believed that long diplomatic and political relations would clearly indicate the importance both sides attach to the relations; “Belgian Chamber of Representatives and government hail development of relations with Iran in economic and trade, and politics and culture, as well as expanding Parliamentary relations; Iran is an important country deeply rooted inn history of the region,” he told the meeting.

On crisis in the region, van der Maelen said that Belgian Parliament systematically opposed killing of innocent civilians in Palestine, Syria, and Yemen, and shares Iran’s policy that diplomacy would help solve crisis and conflict; “direct contacts between Iran and Belgium are critical to bring peace and stability to the region,” he concluded.