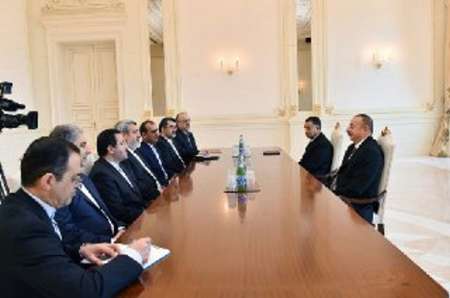 The talks focused on different issues including fight against terrorism, cyber crimes and drug trafficking.

Iran’s minister called for following up the process of implementation of bilateral agreement on natural disasters in which Iran has valuable experiences.

The Azeri president, too, stressed importance of fighting terrorism which he stressec was a threat to the regional countries posed by those outside the region.

Regional countries should combat the threat through unity and cooperation among each other, President Aliyev stressed.

Then, he underlined importance of completion of the North-South Corridor project which would increase the transit capacity in the region.

North–South Transport Corridor is a sea, rail, and road route for exchange of goods between India, Russia, Iran, Europe and Central Asia.

The Iranian interior minister arrived in the Azeri capital on Monday morning. He is to stay here for two days.