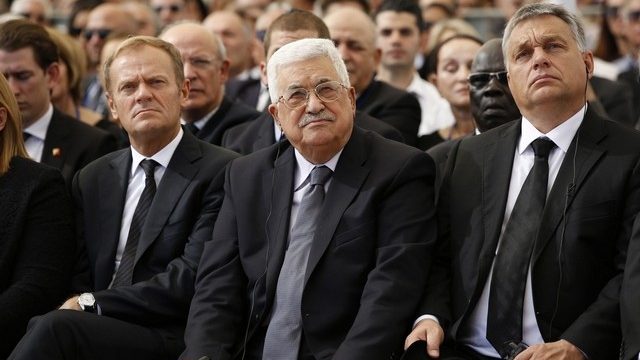 JERUSALEM // Former Israeli president Shimon Peres – a deeply controversial figure in the Arab world – was laid to rest on Friday in a ceremony attended by thousands, including dozens of western politicians.

Palestinian president Mahmoud Abbas was among the mourners at the Mount Herzl national cemetery in Jerusalem and was seated in the front row – reportedly at the request of Peres’s family.

No other Arab leaders attended the funeral of Peres, who played a key role in Israel’s wars against Arab countries.

Mr Abbas negotiated with Peres and signed the Oslo peace accord of 1993, which earned the then Israeli foreign minister the Nobel Peace Prize alongside Israeli prime minister Yitzhak Rabin – who was later killed by a Jewish nationalist – and Palestinian leader Yasser Arafat.

Hamas had urged Mr Abbas not to attend Friday’s funeral and many on social media slammed his decision. But the president’s rival Fatah movement said his presence would disprove Israeli claims that Palestinians only believe in violence, according to the Palestinian Maan news agency.

Peres, who held every major office in Israel, including president and prime minister, died on Wednesday, two weeks after suffering a stroke. He was 93.

Others in attendance at his funeral on Friday included US president Barack Obama and Bill Clinton, who was US president during the negotiation and signing of the 1993 Oslo accord.

In an emotional eulogy, Mr Clinton described Peres as a “wide champion of our common humanity”.

Yet for the Palestinians and for many other Arabs, it is difficult to look past Peres’ history of hawkishness, which included ordering the devastating “Grapes of Wrath” operation against Lebanon in 1996 that killed 175 people dead, most of them civilians.

But perhaps most unforgivable was that he allowed settlement construction to continue on illegally occupied Palestinian land during his years in leadership positions.

“He wasn’t serious about Palestinian statehood,” Abdallah Abdallah, chairman of the politics committee of the Palestinian Legislative Council and a supporter of Mr Abbas, told The National earlier this week. “He didn’t work to implement the courageous step he took of negotiating peace between Israelis and Palestinians … We only remember him as a partner in the foundation of Israel which was a catastrophe for the Palestinians.”

On Friday, Mr Obama took a different view, however.

Mr Obama described the unlikely friendship he forged with Peres given their vastly different backgrounds.

“It was so surprising to see the two of us, where we had started, talking together in the White House, meeting here in Israel,” he said. “I think both of us understood that we were here only because in some way we reflected the magnificent story of our nations.”

The US president also recognised Mr Abbas’ attendance in his eulogy, saying his “presence here is a gesture and a reminder of the unfinished business of peace”.

For all Peres’ controversial standing in the Arab world, he was considered in Israel as the country’s leading “dove”. He and the current hardline Israeli prime minister, Benjamin Netanyahu, were fierce political rivals with vastly different world visions, but Mr Netanyahu said they enjoyed a strong personal relationship and described Peres as a man of vision.

Mr Abbas and Mr Netanyahu, who have barely spoken to one another during the past seven years, shook hands and briefly chatted at the ceremony. The last substantial public meeting between the two men was in 2010, though there have been unconfirmed reports of secret meetings since then.

Mr Netanyahu, who has repeatedly accused the Palestinian president of inciting violence and hatred against Jews, thanked him for coming, saying: “It’s something that I appreciate very much on behalf of our people.”

By The National Worlds