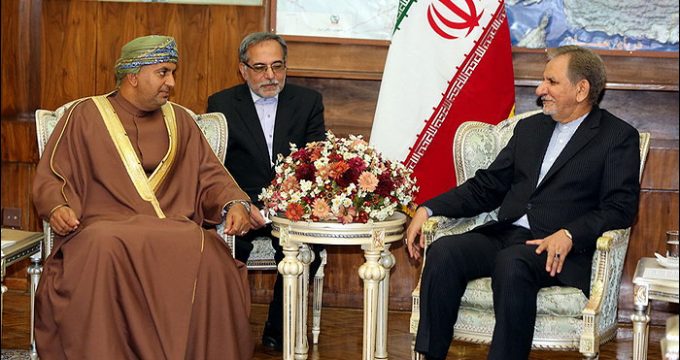 Tehran, Sept 26, IRNA – First Vice President Eshaq Jahangiri said on Monday that friendly relations between Tehran and Muscat should be regarded as an exemplary model for the regional states.

Jahangiri made the remarks in a meeting with visiting Omani Minister of Commerce and Industries Ali bin Masoud Al Sunaidy.

In the meeting, Jahangiri said the Iranian top officials are determined to broaden level of relations and cooperation with Oman.

Oman enjoys huge capabilities in many fields to turn the country to an economic pole in the region and Tehran is willing to cooperate with the friendly country in all fields, Jahangiri said.

The Central Asian states through various ports can find access to Iran and Oman as well as other countries, he said.

Iranian minister of roads and urban development Abbas Akhoundi is scheduled to visit Oman in the near future to finalize the agreement to connect Bandar Abbas and Bander Qeshm of Iran to Oman’s ports, Jahangiri said.

The oil and gas sector prepared the ground for expansion of cooperation between the two countries, he said.

Fortunately, laying of gas pipeline from Iran to Oman is on its final stages and that the hurdles for the project should be removed at the earliest, he said.

After implementation of the Joint Compressive Plan of Action (JCPOA) and lifting the sanctions, cooperation between the two countries have been bolstered, he said.

The Islamic Republic of Iran welcomes active presence of investors from both sides, he said.

The visiting Omani minister, for his part, said that the firm determination of the two countries officials to enhance level of relations will persuade us to play no efforts to attain widescale cooperation.

Ties and cooperation between the Iranian and Omani banks are very good, he said.

Iran and Oman are to sign a memorandum of understanding (MoU) on sports, standard and insurance cooperation tomorrow.