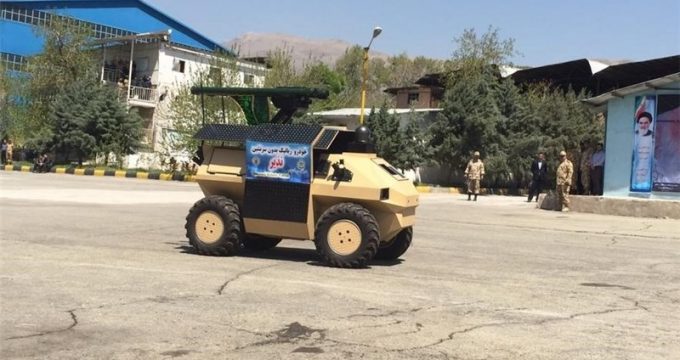 The new products officially became available for use in a military ceremony in Tehran on Monday morning, attended by Commander of Army Ground Force Brigadier General Ahmad Reza Pourdastan.

The military items include an armed robot, a remote-controlled bulldozer and a smoke screen system.

The remote-controlled robot, dubbed Nazeer (alarming), is equipped with four-wheel drive system and can be programmed for reconnaissance and combat missions within an operational range of 2 kilometers.

Capable of carrying loads up to 600 kg, the robot can be armed with machine guns, air-defense or anti-armor missiles.

The driverless bulldozer can also be controlled remotely at a distance of 1,500 meters for minesweeping operations. With great maneuverability, the bulldozer can operate like a manned vehicle.

The other product was a multiparameter smoke screen system used for disrupting laser and thermal optical systems.

Iran has made it clear that its military might poses no threat to the regional countries, saying that the Islamic Republic’s defense doctrine is entirely based on deterrence.