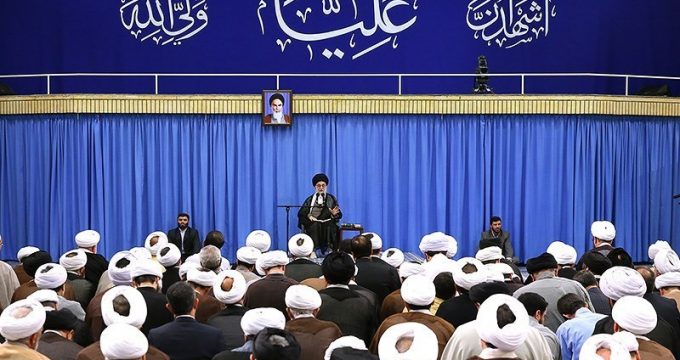 TEHRAN (Tasnim) – Leader of the Islamic Revolution Ayatollah Seyed Ali Khamenei called on Iranian political figures to avoid taking actions that could provoke polarity within the society, warning that enemies are waiting to take advantage of disagreements among Iran’s political forces.

“Bipolarity is detrimental to the country,” Ayatollah Khamenei warned on Monday, at the beginning of an advanced course on Islamic religious studies, held in Tehran.

The Leader called on political figures to refrain from “moves that could risk the country’s unity and integrity”, saying the enemies are waiting to take advantage of any polarity or conflict in Iran.

“We need to move in the enemy’s opposite direction,” Imam Khamenei underlined.

The Leader’s concern about polarization of the society came after speculation ran rampant that former president, Mahmoud Ahmadinejad, would run for presidency in the 2017 election.

There have been also reports that Ahmadinejad had a private meeting with Ayatollah Khamenei at the Leader’s residence in the past few weeks to purportedly announce his readiness to run for the president’s office.

Some political figures had earlier said that Imam Khamenei has advised Ahmadinejad to avoid upcoming presidential election due to be held in spring.

Elsewhere in Monday’s gathering, Imam Khamenei emphasized the need for unity and rapport in the country, and warned against comments, rumors or speculation that would provoke rift within the country.

Ayatollah Khamenei then confirmed that he has advised a gentleman (without mentioning a specific name) in a recent meeting to “avoid getting involved in a certain event (election)” for the good of the country and of that individual himself.

“I did not tell him (specifically) not to participate (run for president),” the Leader explained, saying the individual has been told that his involvement “is not deemed expedient.”

Imam Khamenei noted that a holistic view of the country’s situation and that specific figure’s conditions led to the recommendation that he had better avoid engagement in the event to prevent polarization of the country.

The Leader once again stressed that it was a recommendation, saying it was not about ruling, but about expediency.

The upcoming presidential election in Iran will be held in May 2017.