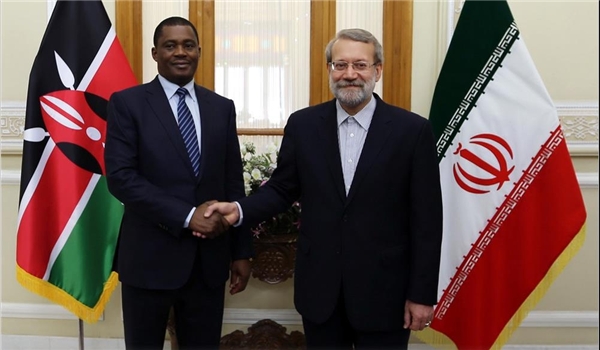 TEHRAN (FNA)- Iranian Parliament Speaker Ali Larijani and his Kenyan counterpart Justin Bedan Njoka Muturi in a meeting in Tehran on Saturday conferred on mutual cooperation in the fight against terrorism.

“A part of our negotiations with the Kenyan speaker was focused on the terrorism crises which are seen in our region and East Africa as Kenya is in the fight against some terrorist groups,” Larijani told reporters today in a press conference after meeting with Muturi.

“Our views about war on terrorism are close and the two countries have identical determination to this end and we hope to expand our mutual cooperation in campaign against terrorism,” he added.

Muturi, for his part, underlined the need for activation of parliamentary friendship groups between Iran and Kenya, and said, “During my talks with Mr. Larijani, we underscored strengthening friendly ties and improvement of economic and cultural relations.”

Muturi arrived in Tehran on Friday morning to discuss bilateral ties with his Iranian counterpart.

The top parliamentary advisor also noted that the two sides will also discuss development of African continent as well as security, fighting terrorism and extremism during Muturi’s stay in Tehran.

“Nairobi is particularly interested in expansion of cooperation with Iran in oil and gas fields,” the Kenyan foreign minister said in a joint press conference with his Iranian counterpart Mohammad Javad Zarif in Nairobi.