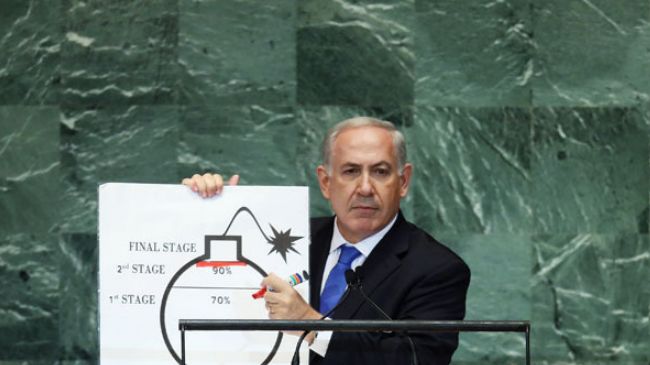 Which is the real threat? Iranian nuclear program versus Israel’s 200 nukes

As Israel continues to oppose the Iranian nuclear deal, leaked emails written by former US Secretary of State Colin Powell suggest that Tel Aviv does have a sizeable cache of functioning nuclear weapons at its disposal.

While Israel doesn’t confirm nor deny the alleged existence of its nuclear arsenal, one of Colin Powell’s recently leaked emails suggests that Tel Aviv does possess 200 nuclear warheads “all targeted at Tehran”.

These revelations cast a new light on Israel’s vehement opposition to the nuclear deal reached between the P5+1 group and Iran in July 2015. Furthermore, Sabbah Zanganeh, Iranian political analyst and Middle Eastern affairs expert, told Sputnik Persian that the existence of the Israeli nuclear arsenal is one of the chief factors contributing to the tensions in the region.

“This is all part of the US double standards policy. The Americans are well-aware of the fact that the Iranian nuclear program always was and still is peaceful in nature and poses no threat to any nation or country. The US also knows that Iran opposes nuclear weapons, and not just for moral or humanitarian reasons, but first and foremost due to its religious beliefs.

Iran rejects weapons of mass destruction of any kind,” Zanganeh said. On the other hand, he argued, Israel, which enjoys absolute US support, constantly threatens other countries in the region, provoking military conflicts and instigating wars against Egypt, Syria, Lebanon, Jordan and Palestine. “By threatening us, Israel shows the world the nature of its regime – a policy of terror and threats against the other nations in the region, backed by the ownership of powerful nuclear weapons of mass destruction.

Obviously, other countries in the region are concerned about this issue,” Zanganeh explained. He also added that while international law condemns any regime that resorts to threats and attempts to build up its nuclear arsenal, in reality this isn’t always the case. “No country in the region can consider this situation satisfactory. In any case, granting absolute support to Israel – in terms of ideological solidarity with its policy of terror and threats, by providing financial assistance and weapons technology, and aiding in specific activity – makes the United States an accomplice. Therefore, the US must also bear full responsibility for the situation at hand,” Zanganeh concluded.