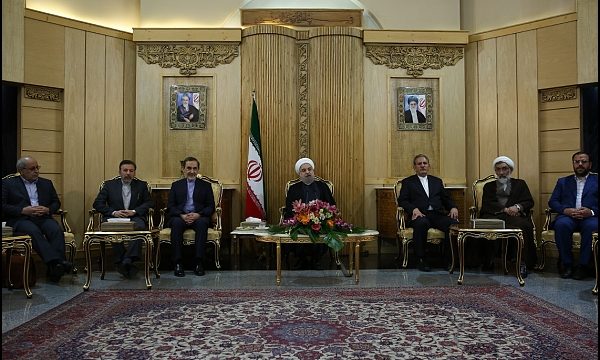 Rouhani: US promised to end procrastination about JCPOA

Tehran, Sept 23, IRNA – President Hassan Rouhani said on Friday that the US promised to end procrastination about enforcing the Joint Comprehensive Plan of Action.

The President made the remarks upon arrival in Mehrabad Airport.

The US representative to the Joint Commission on JCPOA was notified by Iranian Deputy Foreign Minister for Legal and International Affairs Abbas Araqchi about Iranian protest against the US failure to honor its commitments to the JCPOA.

Araqchi took Iranian protest to the Joint Commission on JCPOA including procrastination of the US Department of Treasury to authorize the European banks to do business with Iran.

President Rouhani said that eight months have passed after enforcing the JCPOA, but, the US Department of Treasury has yet to authorize the European banks to do business with Iran.

President Rouhani said that the major banks have reported to Iran that the US Department of Treasury refused to give a clearcut license to the banks, telling them that the US lifted the sanctions about the nuclear dispute, but, the other sanctions are still in place.

President Rouhani said that Iran is satisfied with the European states conduct of the JCPOA and that both the Iranian government and the other parties to JCPOA are critical of Washington’s conduct of the nuclear deal.

‘In my opinion it is very important that the six states parties to JCPOA have same stance as that of Iran during the first session of the Joint Commission on JCPOA,’ the president pointed out.

‘We will fulfill our commitments provided that Washington also keeps its promises.’

French president himself that the deal was reached after all efforts and no country can create disruption in banking issues, Rouhani said.

Meanwhile, President Rouhani criticized the ruling issued by the US High Court to freeze the Iranian assts of two billion dollars, saying that such conduct of the US Supreme Court is blatant breach of the International Law and national sovereignty of the Governments under illusive excuses brought against the Iranian government.

‘We will never allow the US to swallow Iranian assets and we will take them back,’ the President said in reference to the legal proceedings initiated by Iran with The Hague-based International Court of Justice to retake Iranian frozen assets from the US.