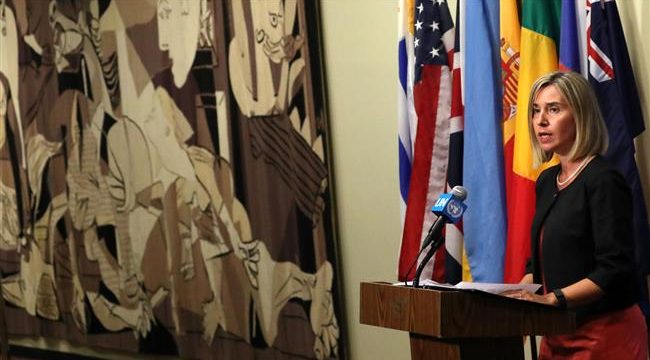 The European Union foreign policy chief says Iran is complying with the landmark nuclear agreement it struck with the five permanent members of the UN Security Council plus Germany last year.

Speaking at a press briefing following a meeting between the foreign ministers of Iran and the P5+1 group of countries – Britain, China, France, Russia, the United States and Germany – at the UN headquarters in New York on Thursday, Federica Mogherini said the common assessment was that Iran was living up to its commitments under the deal, dubbed the Joint Comprehensive Plan of Action (JCPOA).

“We have three reports from the IAEA (International Atomic Energy Agency) confirming that Iran has taken all the steps it had to on nuclear related issues. As you know sanctions, nuclear related sanctions, were all lifted,” she stated.

The EU foreign policy chief noted, “We all reaffirmed very strongly the political importance, the historic political importance, of this agreement that has shown to the world and to ourselves that even the most difficult issues can be solved through dialogue and diplomacy and with a win-win approach, overcoming the zero sum game approach that sometimes block us in some of our talks and negotiations.”

Mogherini said the issue of Iran’s ballistic missiles was not discussed during Thursday’s meeting, because Tehran’s missile tests are not a breach of the JCPOA.

The top European diplomat highlighted that parties at the meeting also addressed the removal of hurdles which foreign banks and financial institutions face for business with Iran.

Iran and the P5+1 signed the JCPOA on July 2015. It went into effect on January 16, and resolved a long-running dispute over the Iranian nuclear program.

Under the JCPOA, the Islamic Republic has agreed to roll back certain aspects of its nuclear program — including the volume of its uranium stockpiles enriched to the 20-percent level — and has provided international atomic monitors enhanced access to its nuclear facilities.

In return, Iran’s partners agreed to terminate all nuclear-related sanctions against Iran.

Some international banks, however, still shy away from financing trade deals and processing transactions with Iran fearing US penalties.