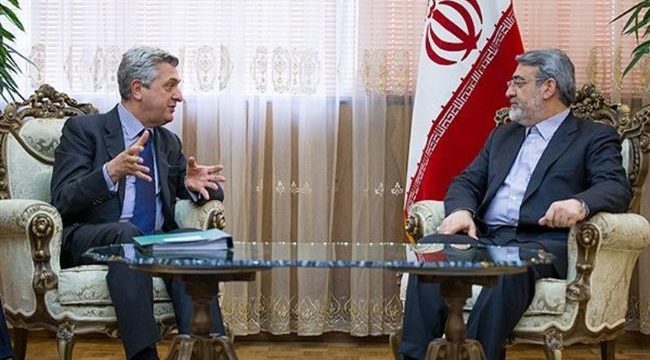 The Iranian interior minister says the UN has failed to provide Tehran with sufficient aid to help the country cover the expenses of the services it is offering to refugees on its soil, particularly Afghan nationals.

Abdolreza Rahmani-Fazli made the remarks in a Tuesday meeting with UN High Commissioner for Refugees (UNHCR) Filippo Grandi in New York.

The Iranian minister traveled to New York to attend the UN General Assembly High-Level Meeting on Refugees and Migrants, which addresses large movements of refugees and migrants.

Rahmani-Fazli further voiced Iran’s concern over the situation of illegal migrants, which has created many problems for both the Iranian government and people.

“The United Nations and relevant international institutions should provide the Afghan government with more serious” assistance so it can organize and secure the repatriation of its nationals, he added.

Foreign assistance to Iran only covers less than three percent of its expenses in dealing with the refugees it is sheltering, said Rahmani-Fazli, urging international aid bodies to take more responsibility “in providing the required expenditure to take care of the healthcare, medical, educational and food costs of refugees and displaced people.”

Iran has been hosting large numbers of Afghan refugees, who fled wars and conflicts in their country. In recent years, Tehran has been urging the Afghan nationals to return home voluntarily to contribute to the reconstruction of their homeland.

More than 350,000 Afghan refugee children are now going to school in Iran while some 48,000 undocumented Afghan children were allowed last year to enroll for the first time in Iranian public schools, according to UNHCR.

Fazli called for efforts to restore security to the countries grappling with terror groups and help them improve their economic conditions as the only “realistic” approach towards stemming mass migrations and displacements.

For his part, Grandi said his observations during a visit to Iran in June showed that the country’s attitude towards refugees “is a model in the world.”

Also on Tuesday, the Iranian interior minister met with Swiss Head of the Department of Justice and Police Simonetta Sommaruga as well as Armenian Foreign Minister Edward Nalbandian.