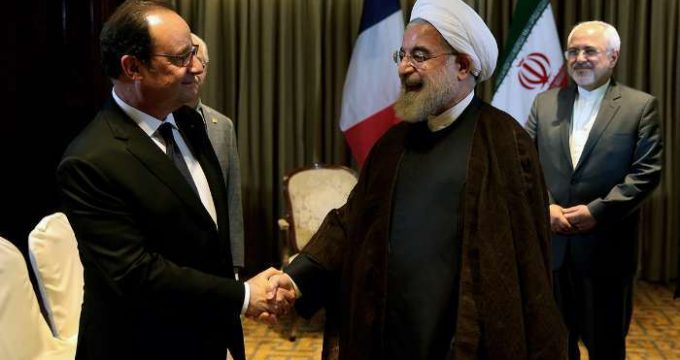 Rouhani: Parties to JCPOA should contribute to its efficacy

TEHRAN, Sep. 21 (MNA) – President Hassan Rouhani has met with leaders of countries parties to JCPOA to urge them to contribute to the deal’s effectiveness in his efforts to bring the deal to its deserved status.

Rouhani is in New York to participate in annual UNGA. He met with European leaders parties to the JCPOA, including British Prime Minister Theresa May and French President Francois Hollande and in both meetings, Rouhani waged efforts to bring to their attention their commitments in JCPOA and necessary changes should be made in order for the deal to be effective.

On Tuesday night, Rouhani and Hollande sat in a meeting, where Iranian side criticized the current trend in nuclear deal, much vaunted for its bringing change to Iran’s difficult economic conditions, mainly banking restrictions which hit financial sector the most; “JCPOA should not be laid in abeyance and weakened; all sides to the deal should respect their commitments; Iran would not accept unilateral and unconstructive restrictions imposed by any party to the deal,” Rouhani asserted. “All nations and companies would be benefited from the deal implementation, now that after long negotiations, the deal should matter in economic terms.”

“In line with this,” Rouhani emphasized, “European leaders should provide necessary guarantees of cooperation of their banks, financial firms and insurance companies with Iranian banking system.” Turning to bilateral relations with France, President Rouhani reiterated his policy of Iran’s welcoming any country as major Iranian foreign policy of open doors and constructive cooperation with the world; “no restrictions should affect Iran-France relations and cooperation in science, economics, and trade; we believe that JCPOA should bring concrete benefits for both nations of Iran and France,” Mr. Rouhani told Hollande, turning to terrorism and much-needed coordination and convergence in fighting it as a global issue; “Iran hails cooperation with EU especially France in attempts to curb extremism, and we responded positively to requests by our neighbors for contribution to fight against terrorism in Iraq and Syria; Syrian crisis has a political and non-violent solution, with enduring ceasefire, refugee repatriation, and humanitarian aid being the major priorities,” he said.

“In Yemen, torn by violence and devastated by unremitting airstrikes of Saudi Arabia, it is a genuine expectation that France and EU help restore stability to Yemen; in Lebanon, the stalemate in electing president of the country should be addressed and the people should exercise their rights in this regard,” Rouhani added.

President Hollande for his part, shared Rouhani’s opinion that opportunities provided by JCPOA should be taken for granted by both nations; “Paris advocates a fast-track course of action in fighting terrorism and while appreciating Iran’s important role, welcomes working with Tehran in effectively alleviating the violence and bringing the region stability and peace,” he told the meeting.