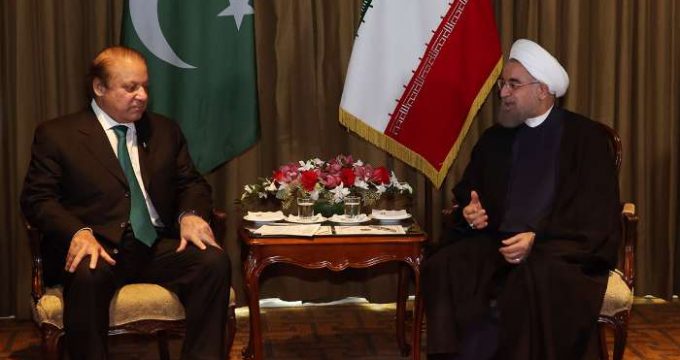 The meeting was held in New York on the sidelines of the 71st session of the UN General Assembly in New York.

President Rouhani arrived in NY to attend the event. He is to address the Assembly in coming days.

‘Iran-Pakistan economic ties should keep pace with their political and cultural ties,’ said the President stressing that expansion of relations with Pakistan is highly important for Iranians as the two nations enjoy cultural and historical affinity.

He noted that historical, cultural and regional conditions necessitate strengthening of bilateral relations in line with interests of the Iranian and Pakistani nations.

Fortunately since removal of sanctions, a proper opportunity has been provided for strengthening two-way cooperation between the two capitals, especially in the economic domain, said the Iranian President.

He voiced Tehran’s readiness to meet energy requirements of Islamabad adding that both countries can also further expand bilateral cooperation in the fields of scientific activities.

Noting that banking relations are the key for economic relations, President Rouhani stressed that special efforts are needed to further activate and speed up previously made banking agreements.

Chabahar Port is a seaport located in southeastern Iran, on the Gulf of Oman and in Sistan-Baluchestan Province. It serves as Iran’s only oceanic port.

Gwadar is a port city on the southwestern coast of Balochistan, Pakistan. it is located on the shores of the Arabian Sea, approximately 700 kilometres to the west of Pakistan’s largest city, Karachi. Gwadar is near the border with Iran, and is located to the east of the Persian Gulf and opposite Oman.

“Iran’s efforts have always been based on taking borders of the two countries as border of security and friendship and today, much progress has been obtained in this connection and we should continue our efforts to this end,” President Rouhani noted.

Meanwhile, the Pakistani premier said that Islamabad believes that Pakistan and Iran are as one single nation, country and government.

He noted that the two neighboring states culture, tradition, and economy are complementary to each other and that Islamabad is seeking to upgrade bilateral cooperation with Tehran.

The Pakistani premier said that the current level of bilateral commercial ties does not fit the existing capacity.

The premier stressed that the two capitals have to double their efforts to facilitate activities of Iranian and Pakistani traders and merchants.

Pakistan also believes that development of Chabahar Port is a positive event complementary to Gwadar Port and the Iran-Pakistan-China corridor.