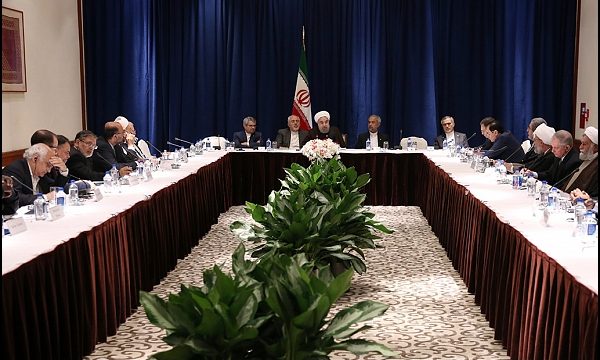 New York, Sept 21, IRNA – President Hassan Rouhani stressed the need for all Muslims to concentrate on their commonalities to safeguard their interests.

He made the remarks here on Tuesday local time (early Wednesday morning in Tehran) in a meeting with the leaders of Muslims communities of the US.

President Rouhani is in New York to attend the 71st United Nations General Assembly and address the meeting.

He stressed the importance of promoting unity and coordination within the Islamic world noting that the contemporary world is suffering from
misleading interpretation of Islam and its teachings by Takfiri and terrorist groups.

There is a struggle between on the one hand, the surface of religions and on the other hand, between the good and the evil, said the President.

He said it is the duty of Muslim governments and thinkers to try to expose the true image of Islam to the world.

The Iranian President further noted that some Islamic governments were refraining from shouldering their responsibilities towards the existing crises.

He added that the fact that some of those governments are under the influence of hegemonic powers deteriorates the situation.

He reiterated that to overcome present problems facing the Islamic world, there is no way but to awaken the Muslim youth and provide them the true image of Islam.

Iran has always rendered assistance to those countries that were fighting against terrorists and considered it as its duty since terrorism is a serious threat against Muslims’ lives, properties and dignity.

President Rouhani also stressed that Iran has always been seeking to promote unity between the Sunni and Shia Muslims.