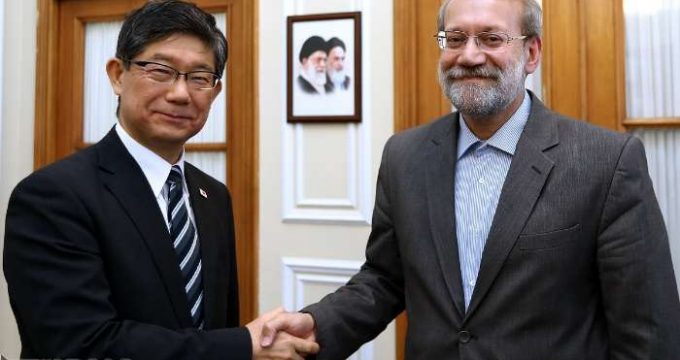 Ali Larijani and Hiroyasu Kobayashi met on Wednesday, where both sides shared the view that Iran-Japan ties had been positive and friendly, with excellent time now ripe for improved cooperation post-JCPOA; “Parliament welcomes expanding ties with Japan especially in industries and trade. JCPOA provide propitious grounds for Japan’s contribution to Iran’s auto-making industry and both nations should grab the opportunity,” Larijani told the meeting.

On regional developments, Larijani believed that Iran occupied a prominent place in terms of enjoying security and stability in a region mired on sectarian violence and terrorism; “Iran’s major line of foreign policy is to support peace and stability in all countries and always welcomed dialogue and non-violent means to settle the conflicts, especially in Syrian crisis and in Yemen,” he told Japanese ambassador, criticizing ‘some countries in the Middle East who supported and armed terrorism as instrumental to their petty interests in spreading terrorism.

Kobayashi for his part said that his fellow country welcomed developing ties with Tehran, especially with overtures by Tehran to major world countries to come to Iran to contribute to country’s economy and unfinished projects after JCPOA implementation. “Iran has a weighty figure in establishing peace in the region. Japanese automakers also hail Iran’s markets and industries and they truly evaluate Iran as great potential consumer market with a penchant for high-quality Japanese brands,” Kobayashi concluded.