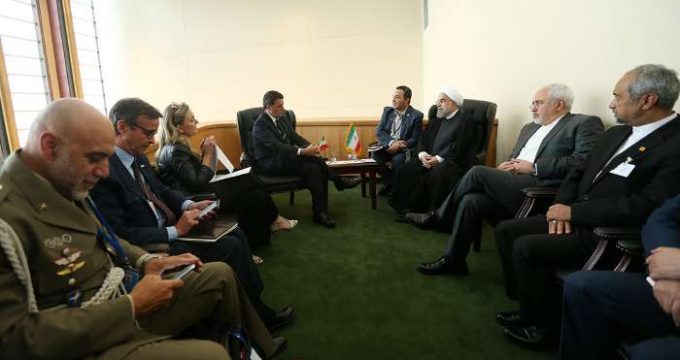 ‘Italy can be Iran’s first EU trade partner under JCPOA’

Speaking with Italian Prime Minister Matteo Renzi on the sidelines of the 71st Session of the United Nations General Assembly on Tuesday night, Rouhani said recent bilateral visits were a turning point in relations displaying the two countries’ will for development and boost in cooperation.

Underlining the need for the boost in economic, scientific and political cooperation, Rouhani described the role of private sectors as valuable, adding “we must support and encourage the companies in both countries interested in bilateral trade relations.”

Rouhani also referred to JCPOA and underlined all sides are committed to provide proper space for economic activities in Iran. “Both sides should adhere to the strength and stability of JCPOA which can be the basis for increased peace and stability in the region.”

He reiterated that European leaders must ensure banks and insurances for financial cooperation with the Islamic Republic. “Iranian as well as regional nations and companies should benefit from the advantages of JCPOA.”

Italian prime minister, for his part, underlined that Rome is enthusiastically looking to strengthen comprehensive ties with Tehran. “Italy is ready for any action in order to reinforce economic ties.”

Pointing to the upcoming visit of Italian delegation to Iran, Renzi noted “regarding banking ties, SACE Export Credit Agency is ready to offer the necessary guarantees.”

Renzi ensured that Italian side will do its best to strengthen JCPOA commitments, which is a key process for Italian investors too.

He also expressed Italy is willing for consultations with Iran on regional and international issues.

Heading a high-ranking politico-economic delegation, President Rouhani arrived in New York on Tuesday to participate in the 71st annual session of the United Nations General Assembly.