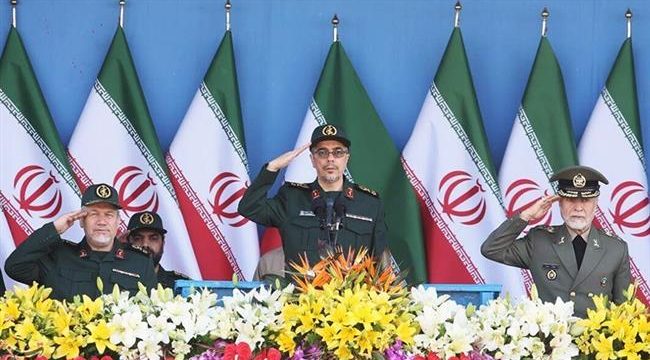 Various divisions of Iran’s Armed Forces are holding annual military parades on the first day of the Sacred Defense Week, which marks the 36th anniversary of the eight-year Iraqi war on Iran.

The parade in Tehran, held in an area near the mausoleum of Imam Khomeini, features military units from the Army, the Islamic Revolution Guards Corps (IRGC) as well as the Police Force.

Similar rallies were also held in other Iranian provinces to commemorate the occasion.

During the parade in southern Tehran, Iranian Armed Forces showcased their latest achievements in the area of defense, including various missile defense systems.

Among the military equipment showcased during the event was the S-300 missile defense system as well the domestically-built Emad ballistic missile successfully test-fired in October.

Units of the Army’s ground forces also put on display a series of defense hardware, including a new generation of the Zolfaghar battle tanks, the Fajr rocket-launching vehicles and the Kia’an 120mm self-propelled guns.

Meanwhile, Iran’s southern waters near the port city of Bandar Abbas have also been the scene of another large-scale naval parade featuring 500 vessels, submarines, fighter jets and helicopters.

In late September 1980, the regime of slain Iraqi dictator Saddam Hussein launched a war against Iran. Iran holds a military parade every year to honor the martyrs of the eight-year war imposed by the former regime in Baghdad.

Head of the Chiefs of Staff of the Iranian Armed Forces Major General Mohammad Hossein Baqeri has delivered a speech at the event in place of President Hassan Rouhani, who is currently in New York to attend the 71st Session of the UN General Assembly.

In his address, Major General Baqeri said the Sacred Defense Week is a reminder of the Iranian nation’s bravery in the face of an enemy that failed to achieve its goals in a war that it waged 36 years ago with the backing of Western and Eastern powers.

Enemies masterminded the eight-year offensive against Iran to bring the country to its knees, but that turned into a “strategic opportunity” for the nation and the establishment to display their capabilities in defending their independence and the ideals of the 1979 Islamic Revolution.

“During the Sacred Defense, our soldiers learned how to stand on their own feet under sanctions,” said the senior commander, adding that “the preparedness of Iran’s Armed Forces is currently at a satisfactory level.”

He further said the strategies and defense plans of Iran’s Armed Forces have been designed in compliance with the country’s internal and external security as well as its ability to give a timely response to enemy threats.

Major General Baqeri further said Iran’s military achievements are aimed at strengthening its defense might, adding that the country’s “military tests and maneuvers will continue as scheduled, and will not be suspended or postponed under any circumstances.”

Iranian Armed Forces are “closely and precisely monitoring all enemy’s moves in the region,” said the senior military official, emphasizing that the country is “capable of foiling the attempts of regional and extra-regional enemies.”

He said enemies fear Iran’s defense power and “that is why they seek to pile pressure on the resistance front by purchasing large amounts of weapons as well as training and supporting terrorists.”

The ultimate goal of the United States, the Zionist regime and their supporters in launching proxy wars “is to destroy the infrastructure of Muslim states,” he stated.

The senior commander described Iranians as a “peace-seeking” nation, saying the Islamic Republic has never initiated any war against any country throughout its history.

In an address at the Bandar Abbas parade, IRGC Commander Major General Mohammad Ali Jafari advised the Americans not to waste their people’s resources on boosting their “mischievous presence” in the Persian Gulf.

Jafari said the Armed Forces will be “the Iranian nation’s iron fist in the face of enemies,” adding, “This is our home, and we are highly sensitive vis-à-vis the enemies wandering around our home.”

The senior commander slammed the United States for its “unprofessional conduct” in the region, saying “it is the Americans that create costs for themselves and other states through their unbalanced behavior and lack of intelligence domination.”

The Islamic Republic has proved qualified to be in charge of protecting the security of this sensitive and strategic region, said Jafari, stressing that the country’s Armed Forces “are making efforts to promote their capabilities day by day.”