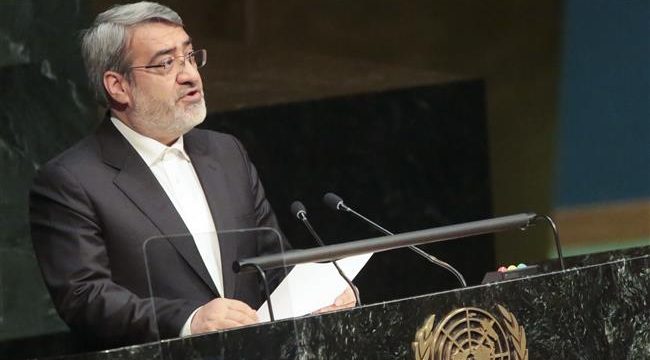 New York, Sept 20, IRNA – Iran’s Interior Minister Abdolreza Rahmani-Fazli stressed on Monday the need for adopting a “defined mechanism” by the international community to deal with the problem of refugees and migrants.

Rahmani Fazli also Director General of the Bureau of Foreign and immigrant Affairs at Iran’s Ministry of Interior, made the remarks while addressing a United Nations high level meeting here on refugees and migrants titled ‘Large Movements of Refugees and Migrants.”

Noting that Iran has been hosting a huge refugee population for decades, the minister said it is necessary that the rest of international community also undertakes new and additional commitments towards refugees and host countries.
The full text of Rahmani Fazli’s speech to the UN meeting follows:
In the name of God, the Compassionate, the Merciful

Mr. Chairman;
Allow me at the outset to express my sincere appreciation to you, as the chairman of this very important and timely meeting on ‘Large Movement of Refugees and migrants’; and wish you every success. We have high hopes that the outcome of this meeting would take effective steps towards solving one of the major problems of international community.

Distinguished Delegates, Ladies and Gentlemen;
In reviewing the causes of human crises and large movements, in addition to economic and social gaps and natural phenomena such as droughts and disasters; foreign intervention and occupation, terrorism, as well as destabilizing and changing legitimate governments are among the root causes of massive influx of the refugees and migrants, especially, in recent decades. Lack of success of international community in reducing and tackling the said factors, has resulted in the continuity of displacement. However, paying due attention to the root causes of crises, in addition to assisting refugees and displaced persons is necessary.

Mr. Chairman;
Large movements of refugees and migrants have effects and implication beyond national borders and a single country alone cannot overcome them effectively. Therefore a joint response and international cooperation is needed in this regard. This meeting would provide an opportunity to adopt a global approach towards the subjects of refugees and migrants so that all countries would take full responsibility vis-a-vis such movements in origin, transit and host countries.

Ladies and Gentlemen;
Due to its geographical position as well as neighboring with great challenging spots, the Islamic Republic of Iran has faced with massive influx of millions of refugees and displaced persons from neighboring countries for more than three decades. During this period, the Islamic Republic of Iran has refrained from closing its borders, and on the basis of its religious and humanitarian teachings and above its international commitments has accepted these large numbers of population. Also, despite very limited international support and being engaged with the conditions of an imposed war as well as unjust sanctions, Islamic Republic of Iran has shouldered the heavy burden of this presence with the highest possible standards. We provided the people in need with different kinds of services including education in different levels from elementary to higher education, free-of-charge health and job opportunities above our commitments under the 1951 Geneva Convention on refugees.

At present, according to the UNHCR confirmation, the literacy rate among population of refugees residing in Iran has reached from initial 6% to over 67%, and all refugees in a way or another enjoy remedial services. Meanwhile, the implementation of the fifth phase of health insurance for all refugees with special diseases and populations in vulnerable situations is underway.

Mr. Chairman;
Having hosted a huge refugee population with protracted situations- the number of which amounted to more than three millions in some periods- the Islamic Republic of Iran has constantly faced heavy economic, political and social burden of such presence. It is our conviction that any new commitment by host countries should be in conformity with their national capacities and legislations; while, prior to that, it is necessary that the rest of international community also undertakes new and additional commitments towards refugees and host countries through a well defined mechanism. On the other hand, we renew our call to the international community to take necessary measures in solving the refugee problem through sustainable voluntary repatriation as well as resettlement.

Mr. Chairman;
I wish to conclude by hoping that this meeting -in a collective effort and constructive interaction of all esteemed delegates- takes a viable and effective decisions on solving the problems and reducing the sufferings of refugees and displaced persons.